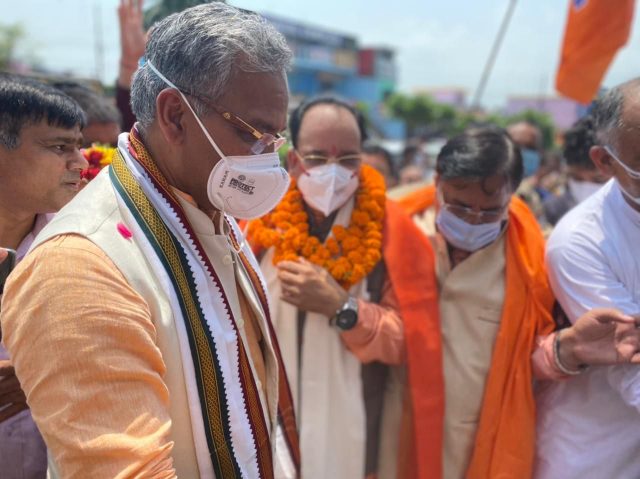 By Our Staff Reporter
Dehradun, 24 Aug: Union Minister of State for Defence and Tourism Ajay Bhatt participated in a welcome programme organised at Bhaniyawala in Doiwala Assembly Constituency as part of the Ashirwad Yatra, here, today. This welcome fucntion was part of a Jan Aashirvad Rally being held across the state by the BJP in the run up to the state assembly elections. Leading the rally, former Chief Minister Trivendra Singh Rawat said that it was a matter of pride and honour for the state and its people that, in the recent reshuffle of the Union Council of Ministers, another MP of the state had secured a place in the Union Council of Ministers.
He said that Ajay Bhatt’s experiences in the field of defence and tourism would benefit the state. He wished Bhatt a bright tenure. On this occasion, BJP State President Madan Kaushik, Rajya Sabha MP Naresh Bansal, BJP State Vice President Anil Goyal, Party District President Shamsher Singh Pundir besides many workers and local people were present.
A Raksha Bandhan function was also held today by the Balawala Mandal of the party where women tied Rakhi to former Chief Minister Trivendra Singh Rawat and sought his protection besides blessing him for a bright future ahead.
On this occasion, the former Chief Minister said he was overwhelmed to get the blessings and immense affection of all the women of his constituency and added that it inspired him and boosted his energies to move forward.
He said that the BJP government had always worked with visionary thinking and made policies for the betterment of women, to improve their economy. Many schemes had been started for equal rights for the wife in the husband’s property, Ghasiyari Kalyan Yojana, self-help groups to make women self-reliant, loan without interest for an amount up to Rs 5 lakhs, etc.
He added that the BJP’s efforts for the uplift and progress of women had always been positive. The government was fully committed to this.

Garhwal Post has established itself as a credible, balanced and forward looking newspaper in India. Based in Uttarakhand, the daily is read by the aware, socially and culturally responsible, high-income elite of society.
Contact us: info@garhwalpost.in
ph dating site couples dating sites canada