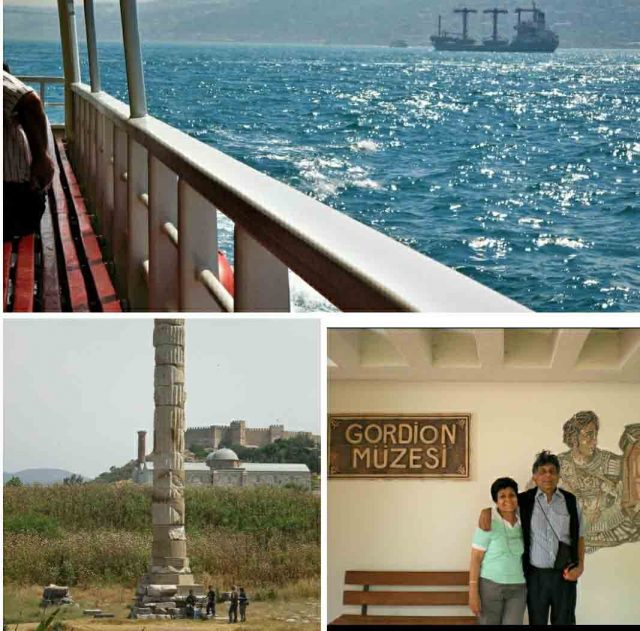 I studied History at College and University, and it was love at first sight. Historical characters and movements have always provoked me to think – why did a particular event happen? What were its effects? Did it leave a good, a bad, or no effect on our civilisation? Were there any similarities between events in the past and the present? Does History repeat itself? Do we learn from the past and use it to our advantage?

History always challenged my mind. It still does.

My passion for the subject made me read, read read…From the vast pool of historical characters – favourites emerged. They always appeared larger than life.

One of my favourites is Alexander or, as he is popularly called – “Alexander the Great” (Sikander in India). He intrigued me enough to compel me to take two trips to Turkey in attempt to follow a part of his conquering trail. My wanderings made me cross the Hellespont as he had done, on to Troy, Pegamum (Bergama), Ephesus, Granicus (where he fought a famous battle with the Persians), Gordion (where he impatiently cut the “Gordion Knot” instead of untying it), and Ancyra (modern Ankara). At every stage, I felt I was in his company because these places were very important in his all conquering campaign.

Alexander was born in Pella in Greece in 356 BCE. According to his biographer, Plutarch, he had light skin, blond hair and melting blue eyes. A strong natural fragrance came from his body – so strong that it perfumed his clothes.

On the day he was born, the temple of Artemis at Ephesus (one of the seven wonders of the ancient world, where now stands a solitary pillar) was burned down. It is said that the Goddess Artemis was too involved in Alexander’s birth to pay attention to saving the magnificent temple.

Fame was his passion – NOT wealth or pleasure. When he heard that Phillip (his father), had conquered a territory, he would be sad rather than happy. The reason – it meant he had one territory less to conquer!!

He was tutored by Aristotle, who had a profound effect on him and who he loved as much as his father. His father had given him life – but his teacher had taught him to use it.

He showed a robust commonsense. It is reflected in how he acquired Bucephalus, his magnificent horse. Bucephalus was Alexander’s horse throughout most of his career. Some horse traders had brought this magnificent animal for sale to King Philip, but no man could ride or tame him. The traders were taking Bucephalus away when Alexander remarked that it was a shame to let go such a magnificent horse, and wanted a try to ride him. He had noticed that Bucephalus was afraid of his own shadow and hence panicking!! He turned the horse to face the sun and settled him down and rode him and let him go at full speed, urging him on with a commanding voice.

Alexander had announced to the world who he was! It was a sight that would scorch the battlegrounds of many countries -Alexander riding Bacephalus and marshalling his men around into Asia Minor, Syria, Egypt, modern Afghanistan and then into India. He fought many a battle.

Some things stood out in his campaigns.

He was generous. He distributed all his money (called talents) to his soldiers so that their families could be looked after well. When one of the Generals asked what he had kept for himself Alexander replied, “My hope.”

He ate sensibly and was in command of his appetite.

When he had free time, Alexander would read, write or hunt. He loved good conversation.

He knew his mind. Darius, the great Persian King, was being hounded by Alexander, as he chipped away at his mighty empire which forced Darius to offer peace. He offered to give one of his daughters in marriage if Alexander would be satisfied with dominion over all countries west of the river Euphrates. Alexander told his friends about the offer and asked their advice.

Parmenio, one of Alexander’s most trusted and sensible commanders said, “If I were you, I would take it gladly.”

Alexander paused for a momemt, looked Parmenio in the eye and responded, “So would I, if I were Parmenio, but I am Alexander. I will send Darius a different answer.”

And this is what Alexander wrote to Darius, “All of Asia is mine, including all of its treasure. This money you offer is already mine. As for your daughter, if I want to marry her, I will do so, whether or not you approve. If there is anything you want from me, you may come in person and ask for it, otherwise, I will have to go to where you are. I am coming after you!”

Can anyone ever not love someone like him? He just takes my breath away every time I read about him.

That is why I rate him as one my favourite historical characters.

(Kulbhushan Kain is an award winning educationist with more than 4 decades of working in schools in India and abroad. He is a prolific writer who loves cricket, travelling and cooking. He can be reached at
kulbhushan.kain@gmail.com)