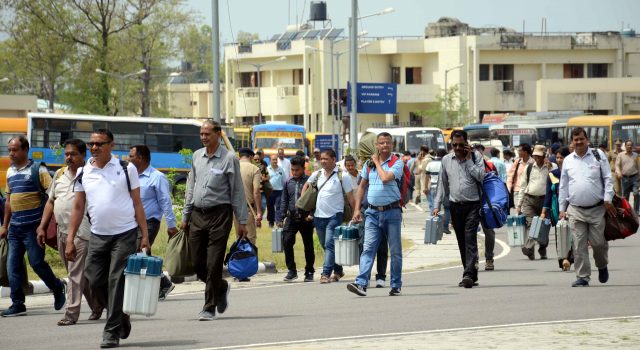 Dehradun, 10 April (IANS): In what is seen as a straight contest between the arch rivals BJP and Congress, Uttarakhand will go to the polls to elect five members of the Lok Sabha on Thursday in the first phase of the election.
A total of 78.56 lakh voters will cast their franchise in the hill state where 52 candidates are trying their luck at the hustings.
All arrangements for the election have been completed for a “fair and free” election through Electronic Voting Machines (EVMs) with 137 per cent VVPATs (Voter-verified paper audit trail), Saujanya, the Chief Electoral Officer of the state, said.
The Director General of Police (DGP) Anil Raturi said tight security arrangements have also been made to ward off any untoward incidents in the state.
“Our forces are on the alert in the state for the peaceful election,” Raturi said.
Out of the total 11,229 polling booths in the state, 697 polling booths have been declared as vulnerable and 656 as critical. Most of the vulnerable and critical booths are in the plains such as the Udham Singh Nagar, Haridwar and Dehradun districts.
Over 45,000 police and other forces have been deployed for the election. This includes 16,000 state police personnel, 65 companies of para military forces and 16,000 home guards. There will also be 152 quick response teams (QRTs) to keep vigil.
Eighty five inter-state barriers, and ten international ones with Nepal, have also been set up.
The BJP is locked in a straight fight against the Congress in four seats. The contest is triangular only in the Haridwar seat with the BSP giving anxious moments to both BJP and Congress. Former Chief Minister Ramesh Pokhriyal Naishank of the BJP has locked horns in Haridwar with Congress’ Ambrish Kumar and BSP’s Antriksh Saini.
The focus will be on Nainital where Congress General Secretary and former Chief Minister Harish Rawat is facing a stiff challenge from the BJP state unit chief Ajay Bhatt.
In the Tehri seat, the BJP’s sitting MP Mala Rajyalaxmi Shah, the daughter-in-law of late Maharaja Manvendra Shah, is facing a tough challenge from the state Congress chief Pritam Singh.
The Pauri seat will witness a straight fight between Congress’ Manish Khanduri, son of former Chief Minister B.C. Khanduri, and BJP National Secretary Tirath Singh Rawat.
Union Minister of State for Textiles Ajay Tamta (BJP) also faces a keen contest against Pradip Tamta of the Congress in the Almora seat.
On Wednesday, most of the candidates resorted to door-to-door campaigns.
In 2014, BJP had won all the five Lok Sabha seats and later bagged 57 out of the 70 seats in the 2017 state assembly elections. Congress, on the other hand, could only win 11 seats in the last assembly elections.

Garhwal Post has established itself as a credible, balanced and forward looking newspaper in India. Based in Uttarakhand, the daily is read by the aware, socially and culturally responsible, high-income elite of society.
Contact us: info@garhwalpost.in
ph dating site