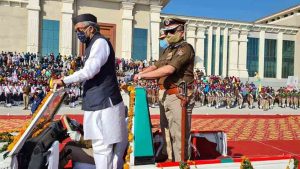 Addressing the function, Governor Maurya greeted the people present on the State Formation Day. She also paid tribute to the statehood agitationists. The Governor also congratulated the police family for the disciplined and grand parade. In her address, the Governor said that Uttarakhand Police was doing a good job in establishing law and order and peace. In times of the Covid pandemic, the police had assisted the public by staying on the front lines. Around 1600 police officers/employees were infected with Covid while performing their duties. But, despite this, the police, doctors, nurses and all employees were performing their duties.
She recalled that women had contributed a lot to the formation of Uttarakhand. All possible steps had to be taken for the overall welfare and empowerment of women. She also said that drugs pose a great threat to the younger generation. An Anti-Drugs Task Force had been formed in the state so that the drug dealers in Devbhoomi are eliminated. She also pointed out that work was underway to provide tap water to every household by the year 2022. Similarly, the state government is continuously working in education, health and other important areas.
In his address, Chief Minister Trivendra Singh Rawat paid tribute to all the known and unknown martyrs of the statehood agitation. He wished all the people of the State the very best on the occasion.
He pointed that Uttarakhand had completed 20 years of its existence. After the formation of the state, the pace of development had been faster than in other states. It is continuously advancing in the fields of education, health, infrastructure development, women’s uplift, etc. The state is moving in a positive direction.
Chief Minister paid his respects to women’s power and said that they had played an important role in bringing about the separate state. The economy of the hilly and remote areas of the state depended on women only. The state government through women’s self-help groups had taken up the task of involving them in activities other than farming. Today, there exist 30,000 women self-help groups in the state.
The Chief Minister added that, to strengthen the economic condition of women, loans of up to Rs 5 lakh were being provided to self-help groups without interest. Interest-free loans of up to Rs 2 lakh were being given to farmers, earlier, which had now been increased to Rs 3 lakh. The state’s development would be speeded up by reducing the gap between the rural and urban economy.
In his address, DGP AK Raturi informed the gathering about the achievements of the Uttarakhand Police.
The Governor and the Chief Minister also released a booklet, ‘Viksit Hota Uttarakhand – Batein Kam, Kaam Zyada’, published by the Information and Public Relations Department. The booklet of 164 pages contains details of various welfare schemes and achievements of the Government of Uttarakhand. A coffee table book published by the Police Department was also released by the Governor and Chief Minister.
Dr Manjunath TC, was Commander of the Ceremonial Parade. Also in command were Deputy Commandant Rekha Yadav and Parade Adjutant, Deputy Superintendent of Police Pallavi Tyagi. After the ceremonial parade, everyone was charmed by the Uttarakhand Police with the performance of its dogs, antiterrorist squads, motor cycling and horse riding. Among those present on the occasion were Speaker of the Assembly Premchand Agrawal, Mayor, Dehradun, Sunil Uniyal ‘Gama’, MLAs Munna Singh Chauhan, Kunwar Pranav Singh ‘Champion’, Harbans Kapoor, Vinod Chamoli, Ganesh Joshi, Chief Secretary Om Prakash, Secretaries RK Sudhanshu, Nitesh Jha, Radhika Jha, Dilip Jawalkar, Brijesh Kumar Sant, Director General, Information, Dr Meharban Singh Bisht, senior officials of the administration and public representatives.