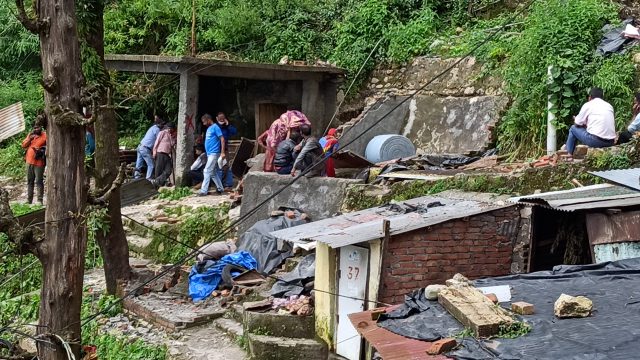 By OUR STAFF REPORTER
Mussoorie, 10 Sep: Of the 84 families residing in Shifan Court, about 90 percent have vacated the houses built on government land.
SDM, Mussoorie, Manish Kumar, Executive Officer ML Shah and Mussoorie Kotwal Devendra Aswal jointly inspected Shifan Court today to ensure those living there were leaving within the stipulated time frame. SDM Kumar stated that 90 percent of the occupants had left, while some people had locked up their houses. As such, an action plan had been made to take immediate action on evicting them.
It is believed that action will be taken tomorrow in this regard.
The platform for Mussoorie Purukul Ropeway is to be built at the Shifan Court, for which the entire exercise is being undertaken. The land had been given to the tourism department by the municipal administration in 2018. On the other hand, the evacuees are very upset, claiming no plans had been made for their evacuation. The situation had been made by the lack of employment during the Corona period. They have requested the government formulate a policy to rehabilitate them.