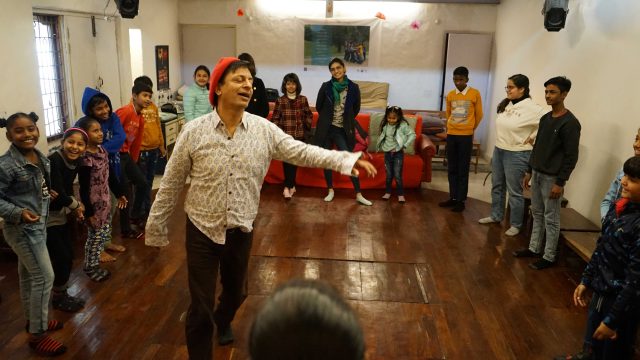 Dehradun, 30 Dec: The Alok Ulfat Children Creative Camp culminated with many wonderful performances by children that were witnessed by parents and many friends of the Alok Ulfat Centre for Performing Arts, Avikal Initiative for Life, Active Learning, and Nanhi Dunya Rangshala. The show was held at the Avikal Studio and Rangshala in Dalanwala, here. 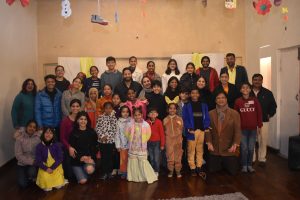 Ashu Satvika Goyal and Ritu Gautam were the main associates of the camp. Dr Neeru Garg, Kavita Kakker, Kiran U Goyal, Vijay Goyal and Sunil Thapliyal were present to celebrate the occasion.

As many as 35 children and young aspiring artists joined the camp to learn from Theatre Maestro Alok Ulfat for six days about the Performing Arts and the art of becoming a creative human being. Children learnt about themselves through Mime, Intuitive Movement, Imagination, Improvisation, holistic life ways, the Environment, Indian culture and much more. They learnt to perform and know about finer elements of voice, speech, storytelling, creative writing and creating wonderful characters which they enacted very honestly.

The specialty of the camp is Alok Ulfat’s approach of keeping simplicity and honesty at the centre of the effort. He discourages Bollywood influences that rob children of their childhood. He believes that children must learn to discover themselves without too much of outside influences so that an authentic artist can be born. Alok, who shares his time between Mumbai and Dehradun, is aspiring to build a Cultural Centre for Uttarakhand. 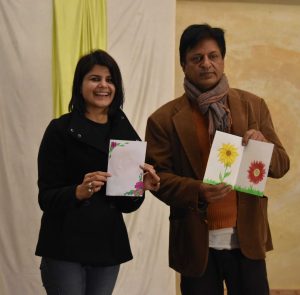 Alok’s passion for storytelling and environmental and social concerns led him to take to social work, theatre activism, environment awareness and work in the theatre and film industry. He is an ex-faculty of National School of Drama (Theatre in Education Company), Delhi, and has worked for the Film and Television Institute of India, Pune, for 8 years. He is also credited with initiating and designing the student selection process at the Film and Television Institute of India, Pune. He has acted, conducted workshops and taught in India and abroad including Canada, several parts of Europe and South East Asia. Several of his students have excelled in their respective careers within the fields of Performing Arts, Direction, Writing and Music. Alok Ulfat’s students are at present actors, directors, and musicians including Anand Gandhi (Director of national award winning film ‘Ship of Theseus’), director Abhishek Dogra, actor Rajkumar Rao, Zeeshan Ayyub, Vijay Verma, Sayani Gupta, Rajiv Kathpalia and Harshvardhan Kapoor among over three hundred professional artists presently working for cinema and stage. The Alok Ulfat directed Zee Television India’s ‘Best Dramebaaz’ and Star Plus’ ‘Mera Star Super Star’ have produced over two dozen successful child artists. Satvika Goyal, Parth Joshi, Shubham Sharma, Raman Rawat, Shaan Mishra, Ayushman Sethi, Lavanya Tripathi, Neyo Pharswan, Neeraj Negi, Nitin Bansal are some of the rising performers who have their roots in Uttarakhand.

Alok Ulfat urged the audience to discourage the ‘industrial’ education system and schools that do not allow goodness of human relationships. He also pleaded throughout the camp to get rid of loud speakers from schools and religious centres because India needs peace.

Wishing all an organic New Year, he said, “For Bharat to grow in the right direction, we need to change our educational approach. More than building big infrastructure, we need to create humans of high moral values and strong character. We have built very ugly cities and now we need to stop and restart in a more organic way of doing things. Let’s lead our children from selfish greed to glory of compassion, from profit to people, from suffering to joy. Let’s encourage vegetarian food and organic agriculture. Let’s build a Bharat that contributes to a unified world with all its diversity. An artist is our hope.”

Alok Ulfat’s next performing arts workshop for youth begins in January, as also many other activities for all age groups. Those interested in joining his work and gaining further information may call on 98214 17495. The next Children Creative Camp will take place in the summer of 2023.

(Ritu Gautam, a model and an aspiring actor, was the coordinator of Alok Ulfat’s Children Creative Camp.)

Garhwal Post has established itself as a credible, balanced and forward looking newspaper in India. Based in Uttarakhand, the daily is read by the aware, socially and culturally responsible, high-income elite of society.
Contact us: info@garhwalpost.in
george cervantes matchmaker uk only dating sites dating app std