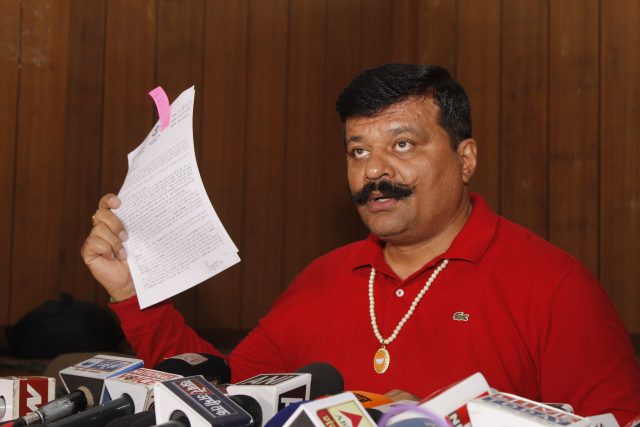 By Arun Pratap Singh
Dehradun, 16 Apr: BJP MLA Kunwar Pranav Singh ‘Champion’ today claimed that BR Ambedkar, not Mahatma Gandhi, deserved to be designated as the father of the nation. In the midst of fresh controversy over his ‘fight’ with another party MLA Deshraj Karnwal, Champion was addressing a press conference here today.
On being asked if he would tender an apology to the party over his fight with party MLA Karnwal, he said that he regretted the incident but there was no question of an apology. He disclosed that he had met CM Rawat with a request to register a case of fraud against Karnwal for obtaining a false caste certificate. He warned that he would go to the court against Karnwal if the government and the party failed to take action and this would be a huge embarrassment for the party and the government! Champion also described Karnwal as a storm in a teacup.
As controversial and as rebellious as ever, the BJP MLA from Khanpur (District Haridwar), Champion, today went to the extent of taking a dig even at Prime Minister Narendra Modi when he stated while thumping his chest that some people claimed that they had a 56 inch chest but his (Champion’s) chest would be at least 58 inches if measured.
Champion also took a dig at the first PM of India, Jawaharlal Nehru, and sought to remind media persons that Mahatma Gandhi was so strongly in favour of making Nehru the PM after independence that he allowed Mohammed Ali Jinnah to take Pakistan.
Champion claimed that Jinnah was highly educated and there was nothing wrong if he had been made the PM instead of Nehru. Champion shared with the media his letter addressed to CM Trivendra Singh Rawat in which he claimed that Mahatma Gandhi had little role to play in the country’s independence and it was due to the INA and the strength of Subhash Chandra Bose that the British got scared and decided to grant independence to India.
Champion further ‘reminded’ that Mahatma Gandhi also ignored the claims of Iron Man Sardar Patel for the Prime Minister’s post though 99 percent of Congress delegates were in favour of Patel and Nehru had secured support of only 1 percent of the delegates. He also claimed that Mahatma Gandhi was responsible for the dynastic politics that followed in India due to Nehru.
In his letter, Champion has urged that BR Ambedkar, architect of the Constitution of India and was an ‘extremely capable person’ be designated as the father of nation in place of Mahatma Gandhi. Champion admitted that this was his personal opinion to which he was entitled as he was a free citizen of a free country.
It may be recalled that Champion had been served notice along with another party MLA Deshraj Karnwal (Jhabreda) by the BJP State President Ajay Bhatt for a public spat with each other that had brought embarrassment to the party. Congress has made a huge issue out of it and had also sought an inquiry into the caste certificate of Karnwal. This allegation by Champion snowballed into a big spat in public between the two BJP leaders causing huge embarrassment to the BJP.
In the meanwhile, BJP spokesperson Dr Devendra Bhasin has disassociated the party with Champion’s comments on Mahatma Gandhi. He asserted that the party, as well as Prime Minister Modi, had the deepest reverence for the Mahatma. Champion’s opinion was personal and his alone.
In a related incident, a delegation of the Congress met Governor Baby Rani Maurya, today, and sought an investigation into Champion’s allegations against Karnwal.

Garhwal Post has established itself as a credible, balanced and forward looking newspaper in India. Based in Uttarakhand, the daily is read by the aware, socially and culturally responsible, high-income elite of society.
Contact us: info@garhwalpost.in
local free dating sites