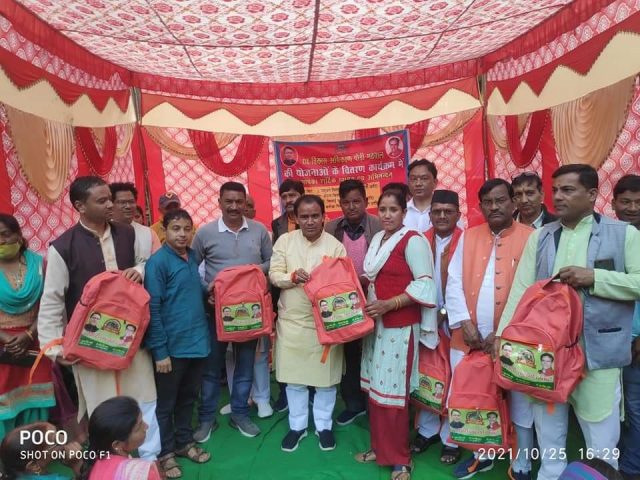 By Our Staff Reporter
Dehradun, 25 Oct: Cooperatives Minister Dr Dhan Singh Rawat today distributed Ghasiyari kits under the Mukhyamantri Ghasiyari Kalyan Yojana to beneficiaries in Pabo Block of Pauri District. It may be recalled that he had chaired a meeting in this regard yesterday in Dehradun, where he confirmed that Union Home and Cooperatives Minister Amit Shah would launch the state government’s ambitious Mukhyamantri Ghasiyari Kalyan Yojana in Uttarakhand on 29 or 30 October.
Earlier, Union Defence Minister Rajnath Singh had also distributed Ghasiyari kits to the beneficiaries in Uttarakhand, last month. It may be recalled that arrangement of fodder for cattle remains a major challenge for women in the hills and this scheme aims at helping them by reducing their drudgery.
Dhan Singh confirmed that Shah would also distribute cheques to the beneficiaries of Pandit Deendayal Upadhyaya Kisan Kalyan Yojana, and he would also launch computerisation of 670 PACS (Primary Agriculture Credit Societies) committees of the state. Shah’s visit to Uttarakhand is likely on 29 and 30 October.
Dhan Singh Rawat today provided Ghasiyari kits to hundreds of beneficiary women in a distribution programme under Rath Development Agency in Kotli village of Paboun block. Under this scheme, this kit is being given to the women working in the fields, comprising two hoes, two sickles, one tiffin, one water bottle, one rope and one bag and some other items. To promote self-employment in rural areas, cheques of Rs five lakhs were distributed to cooperative groups under the Deendayal Upadhyaya Kisan Kalyan Yojana.