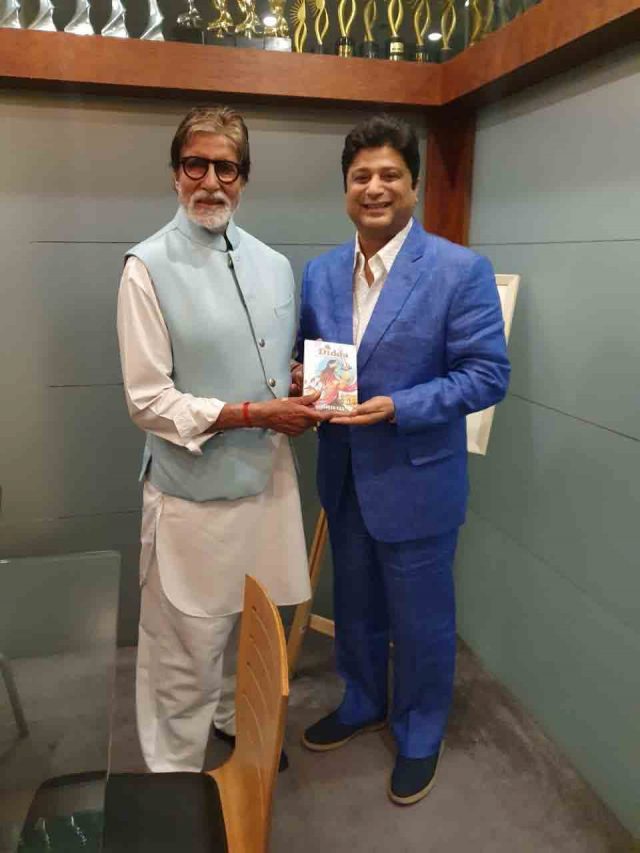 MUMBAI, 12 Jan: From a legendary woman warrior Queen of Kashmir to the living legend, life came full circle for Ashish Kaul as Mega Star Amitabh Bachchan unveiled his bestselling book “Didda – The Warrior Queen of Kashmir”. “It was extremely overwhelming to have Amitji do the honours despite his extremely busy schedule and year-long prior commitments. Didda -The Warrior Queen of Kashmir is the greatest daughter of India who guarded undivided India for 44 years. It was only natural for me to request time from India’s greatest son. History has been unkind to women who yield tremendous power. Didda too was erased from history because men could not accept her genius. Amitji’s support is a milestone in my endeavour to bring forth the forgotten glory of the legendary woman of Kashmir.” “It was not just her bravery but her extraordinary ability to overcome challenges despite her disability that made Didda a truly all round role model for women of the world,” added Ashish. Didda – The Warrior Queen of Kashmir is the overwhelming story of how a beautiful princess abandoned by her parents rises to become the longest serving Queen in the medieval world. Born in 925 CE, not only did Didda defeat death at birth, survive being pushed into Sati, but also went on to create the world’s first commando force, counter-intelligence mechanism and invented the deadly guerrilla warfare strategy. Didda, despite being disabled, is the world’s first para-athlete and serves as an icon for people who hide behind their challenges. Trampled by wars and religious crusades, lies hidden the story of a glorious woman who was considered a harbinger of bad times when born but went on to become a legendary warrior – the saviour of Srinagaram, the capital city of Kashmir. Didda – The Warrior Queen is the untold story of a woman’s rise to power during the 10th century. The legend of Didda is entwined with the life of solitary struggles against prejudice and patriarchy. She eventually went on to rule the unified Kashmir encompassing the Lohar Kingdom and Kashmir for a period of 44 years, taking it to glorious heights and making it the most powerful kingdom in medieval Asia. She overcame her physical disability and rose to crush a mutiny by the prime minister, to take control of a kingdom on the verge of disintegration. She sacrificed her own life and love for the sake of her promise to the dying King to ensure the Kingdom transforms into one of the largest and most feared kingdoms. The foundation laid by Didda helped Kashmir defeat the dreaded warlord Mahmood of Ghazni twice. Didda defeated the King of Iran who attacked with 32800 mercenaries with just 500 soldiers in just 44 minutes in the battle of Kabul and saved India for 44 years. The rare combination of her beauty, courage and glory was hard to accept by powerful men – and they believed the warrior queen was a witch. Didda – The Warrior Queen of Kashmir debuted at a stellar no. 10 on global rankings and has received overwhelming response from critics and readers, alike. It is a part of the unique initiative, ‘Streedesh – 13 forgotten women of Kashmir’ that is being produced by Ashish Kaul, the Chief Creative Officer of Folklore Entertainment and ex-Group Executive Vice President of Zee Network. The book is his tribute to the unsung glory of women of Kashmir.