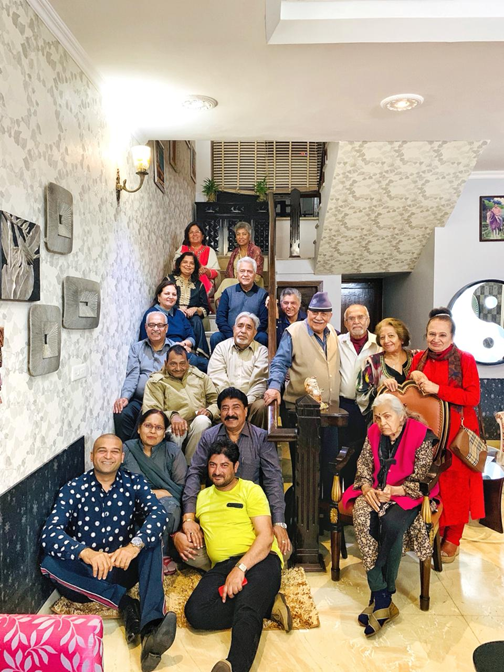 By Col Nirmal Mahajan (Retd)
Eleven veteran couples got together on 17 April evening to have a time of their life – smiling, singing, joking and merry-making, of course, with spirits of all varieties flowing freely.
The very generous and kind hearted and leg-pulling Raj Kumar Tyagi hosted the much awaited evening of fun frolic. We had formed a “New Year Group” to celebrate 1st January, every year. As all of us, barring a few, are grey/silver haired, we are like minded in not going for the 31 December New Year’s party due to the late night hours. So, the idea occurred to celebrate New Year on 1st January between 8 and 10:30 p.m.
As this experiment was a big success, it was unanimously decided to have potluck dinner every 2/3 months in some member’s house, where each couple is told to bring one nominated dish.
We welcomed the Aggarwals with their son, Atul, to our group. Everyone in this group is very fond of singing and listening to old numbers. Promila Mahajan initiated the singing spree with the melodious ‘Dama Dam Mast Kalandar – later everyone joined the chorus including shy ones like Tyagi and Nagpal. The very charismatic Anil Mehra (Tutu) got everyone tapping their feet by singing, “Meri Jaan, Meri Jaan, Aana Sunday ke Sunday”; Mridula sang the very popular number from Teesri Kasam. Vijay Chandna and Anju Aggarwal also added to the fun by singing “Jaaney ki zid na karo”. It was nice to see everybody smiling and in good humour. Ankur Aggarwal, a Merchant Navy Officer, youngest in the gathering, soon became the darling of the group with his sense of humour and ensuring everyone got the right spirit at the right time. As the weather was a little nippy and, some of us, especially the ladies were feeling a little cold, we shifted the gathering indoors.
Later, the dinner with a variety of dishes, was laid and the same was relished
It was the unanimous decision that we all should meet more often and a new slogan was formed, “Miltey Rahengey to Lamba Challengey” (If we meet often, we all will live longer).
As it was nearing 10:30 p.m., we bid goodbye to each other with the earnest hope of meeting in the near future. Mahajans, Mehras, Kumars, Aggarwals, Geras, Nagpals, Mridula, Tyagis, Chandnas attended the absolutely joyous get together of veterans.