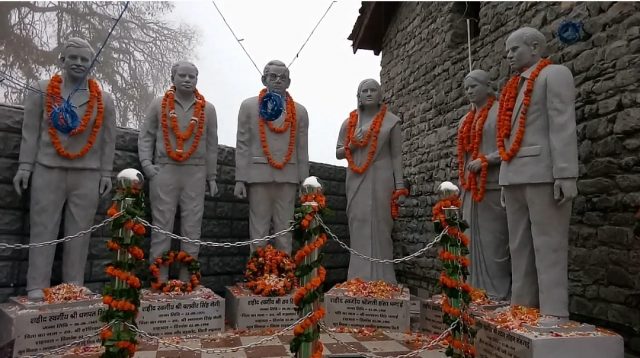 By Sunil Sonker
Mussoorie, 1 Sep: On the morning of 2 September, 1994, the police and PAC opened fire on the statehood agitationists, here, who were taking out a silent procession, killing six people. Even today, those who remember that traumatic event with sorrow. Tributes will be paid to the martyrs tomorrow at the Martyrs Memorial at Jhulaghar, here.
People wonder today whether, even after such sacrifices, the purpose of the movement has been fulfilled, with the villages and hills of the state rapidly emptying. The youth have migrated from the villages. Many governments have come and gone, but no one understood the pain of the mountain. Due to this the martyrs’ families and agitationists are feeling cheated.
On the night of 1 September, 1994, five agitationists, who were sitting on a hunger strike at Jhulaghar on Mall Road, were picked up by the police. On the morning of 2 September, the agitationists took out a silent procession to protest against the Khatima shooting and the detention of the hunger-strikers. On their reaching Jhulaghar, the police and PAC opened fire on the unarmed and innocent protestors. Two women, Hansa Dhanai and Belmati Chauhan, died on the spot after being shot in the head in the firing. Four other agitationists and Police CO Umakant Tripathi also fell victim to the bullets. These included Rai Singh Bangari, Dhanpat Singh, Madan Mohan Mamgain and young Balveer Negi.
Deputy Superintendent of Police Umakant Tripathi, who was injured by a police bullet, succumbed to his injuries at St Mary’s Hospital. A curfew was imposed that lasted for about a fortnight from 2 September, denying people access even to essential goods. Along with this, 48 people were caught and sent to Bareilly Jail. Hundreds of people were injured.
Hukum Singh Panwar, who was leading the movement in Mussoorie, was taken by the police to Bareilly Jail on 2 September. His young son, Advocate Rajendra Singh Panwar, was shot and badly injured. For a few years, he lost his voice. He was treated at AIIMS, Delhi. He has not been identified as a statehood agitationists till date. Subhashini Bartwal, a woman agitationist who face a CBI case, says that there are many such activists, whose contribution cannot be forgotten. The agitationists must get their due.
It may be recalled that 7 people were killed by police in Khatima on 1 September, 1994. Thousands of people in Mussoorie took to the streets the next day, leading to the police firing and 6 deaths. It has been 23 years since their martyrdom. Despite so much sacrifice, people continue to ask if Uttarakhand is the state of the martyrs’ dreams.
The expectations of the people of Uttarakhand have not been fulfilled yet. Despite the atrocities committed by the police on women, they continue to fight for their rights. The youths’ aspirations remain unfulfilled.
State agitators say that the state’s battle was fought on the issue of migration from water, forest, land and hills. But today all the issues have been lost in front of the ambitions of the leaders. He said that even today Uttarakhand is deprived of basic facilities and a lot has to be done to make Uttarakhand a dream.
State agitationists say that only political leaders have benefited. There have been eight chief ministers in sixteen years. No party is serious for the development of the hills. Migration continues unabated, no concrete policy has been made on this. The leaders fight only for the chair, while promising to fulfill the martyrs’ dreams.
Martyrs killed in the Mussoorie shooting:
The late Belmati Chauhan, (48), wife of Dharam Singh Chauhan, Village Khalon, Patti Ghat, Akodia, Tehri. The late Hansa Dhanai, (45), wife of Bhagwan Singh Dhanai, Village Bangdhar, Patti Dharmandal, Tehri. The late Balbir Singh Negi, (22), son of Bhagwan Singh Negi, Laxmi Sweets Store, Library, Mussoorie. The late Dhanpat Singh (50), Village Gangwara, Patti Gangwadsayun, Tehri. The late Madan Mohan Mamgain, (45), Village Nagjali, Patti Kuldi, Mussoorie. The late Rai Singh Bangari, (54), Village Todera, Patti East Bhadar, Tehri.