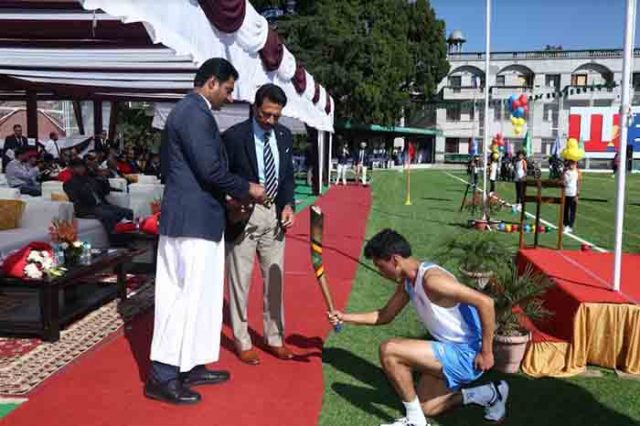 Dehradun, 22 Oct: The Annual Athletics Meet of St George’s College, here, was held today. Manorite of the batch of 1977, Major General Vikram Dev Dogra (Retd) was the Chief Guest. The event was attended by prominent members of the Alumni Association, Patrician Brothers from institutions all over the country and other special invitees. Also present was Brother Superior JC Carroll, Brother Tomy Varghese, Manorite parents and the entire faculty of St George’s College.
The programme began with the traditional torch relay followed by the Athletes’ March Past. The school brass band put up an enthralling show with their mix of traditional and modern renditions. The four houses then presented a theme-based opening dance promoting awareness against the use of single-use plastics, the need for water-conservation, protection of the environment and Integrity, the theme of Manor House for 2019.
Gymnastics and Yoga displays and other track events, followed by the Inter-class March Past were part of the highlights of the day. Past pupils of the Golden and Silver Jubilee batches attended the event and were felicitated.
The vote of thanks was delivered by Rachit Taparia. The day came to a close with the school song and national anthem.