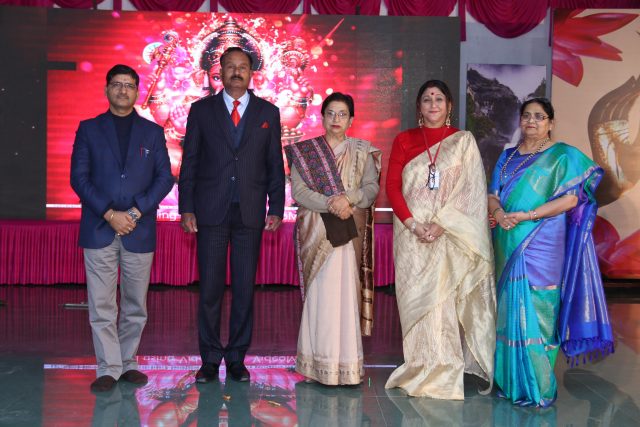 By OUR STAFF REPORTER
DEHRADUN, 27 Feb: Doon Heritage School celebrated its 5th Annual Day, Virasat 2019, on 24 February. The event began with the inauguration of the Activity Village, ‘Karma’, by the Chief Guest, Ranbeer Singh, the Regional Officer, CBSE, Dehradun.
Chhaya Khanna, Principal, Scholars’ Home, and Chairperson, CBSE Sahodaya School Complex, was also present.
The ceremony began with lighting of the lamp by Ranbeer Singh.
It was followed by the Ganesha Vandana dance. Capt Rohit Soti, Chairman of Doon Heritage School, and Principal Meenakshi Soti extended a welcome to the guests and parents of the students.
Capt Soti expressed his heartfelt tribute to all those who recently laid down their lives in the Pulwama attack.
Thereafter, the graduation ceremony for class 12 was held, in which the top 20 students out of 90 students of the first batch of class 12 were presented the Scholar of the Year awards. They then sang the school song for the last time in DHS.
Priyanshi Singh and Kartik Shahi gave heartfelt Thanksgiving speeches, after which the Annual Day celebration began with the first act, “The Sound of Music”, presented by students of the junior wing, which received lots of applause. The senior wing presented a short play written and directed by the Principal, Minakshi Soti, – “Ganga- The flow of divinity”. It touched upon each and every state where the holy river spreads its sacredness – the flow of divinity beginning from Gomukh till Gangasagar. The finale was the dance “Suno Gaur Se DuniyaWalo…… Sabse Aage Honge Hindustani”.