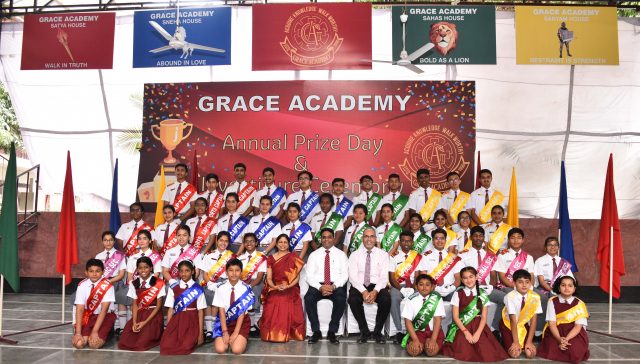 Dehradun, 11 May: The Annual Prize Day and Investiture Ceremony was commemorated on the 11th of May by Grace Academy. This year’s Chief Guest was Dr. R.W. Alexander Jesudasan, Principal and Secretary of Madras Christian College, Chennai. He and his wife Nirmala Jesudasan were welcomed by the Principal, Benjamin Newton along with the School Captains Designate.
Initiating the programme, the Master and Mistress of Ceremonies for the occasion were: Samuel Rajan Nandini Upadhyay, Raunak Bailey and Anna Fiol. The comperes invited Dr. David G. Fiol (Founding Principal, Grace Academy) to begin with a word of prayer. Hannah Joseph read the exhortation from the Bible Matthew 25:21, themed: ‘To be a good and faithful servant.’
The Principal gave the audience an introduction of the Chief Guest and thence proceeded to present the Annual School Report. Thereafter, tiny tots of Class 2 presented a choreographic presentation. Prizewinners were felicitated for their outstanding achievements as certificates and prizes were handed out by Dr. and Mrs. Jesudasan. A folk dance was presented by the senior girls. This was followed by mellifluous renditions by the staff choir and the school choir, all in praise of the Almighty.
The solemn occasion was marked by the introduction of the Primary School Student Council. Students of the Primary School assumed new roles to lead the junior students. In succession, the new Student Council for 2019-20 was introduced as they marched with poise and vivacity onto the stage. Proud parents placed sashes on their children and the Principal led the Council members to take the oath of office for their new responsibilities. The Boy Captain for this year is Jonathan Livingston and the Girl Captain is S. Nita Charlotte. Dr. Mohan Chacko (Chairman, Grace Educational Society) addressed the audience and led in the prayer of committal for the students to manage their leadership with responsibility. After the School Song, the Student Council marched down the aisle.
In his address, the Chief Guest complimented the Principal, board and staff members and the parent and student body on their contribution to the school’s success. Giving the example of extraction of gold from a mine, he emphasised that students must work on what’s on the inside which would eventually reflect on the outside. He advised parents and teachers to establish a synergy between head, heart and hand to make education meaningful in the children’s lives. He hoped the school would continue to remain excellent and relevant even as years roll by.
Nancy Farmer (Coordinator, Classes 11 & 12) presented the Vote of Thanks and the event culminated with the National Anthem.