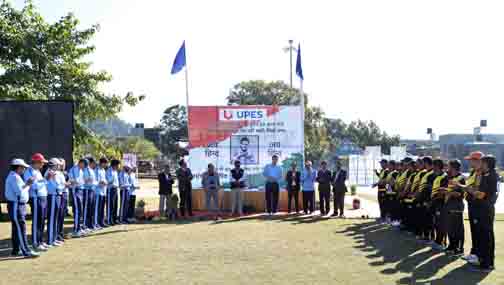 DEHRADUN, 20 Dec: The 5th ‘Shaheed Memorial Cricket Tournament’ got underway at the Bidholi Campus of UPES, here, amidst great enthusiasm and patriotic fervor on 18 December. Conceptualised in the year 2014, the event is organised annually by UPES to generate a corpus for the family of a martyred brave heart of the Indian Armed Forces from Uttarakhand. This year, the tournament is being organised in the memory of the late Naik Brij Mohan Singh of 9 Para, who made the supreme sacrifice of laying down his life for the country during the Kargil war. He was also awarded the ‘Vir Chakra’ posthumously. The finals of this edition will be held on 4 January.
Sharing the details of the event, Arun Dhand, Senior Director, UPES, said that the tournament echoed the gratitude and respect UPES had for the soldiers of the Indian Armed Forces who bravely give away their lives for the safety and integrity of their motherland. During the inauguration and the finals of this tournament, the family of the martyr is brought with all due honour and respect to the campus, where apart from remembering the braveheart, they are also given one-time financial assistance.
Sharing brief details of the previous four editions of this tournament, Dhand stated that the first edition held in 2014 was in the memory of Havaldar Gajendra Singh from Dehradun, who laid down his life fighting terrorists in the 26/11 Mumbai attack and was also awarded the Ashok Chakra (Posthumously); the 2015 tournament was held in the memory of Rifleman Shishir Mall from Dehradun, who made the supreme sacrifice while fighting insurgents in the Kashmir valley in 2015; the 2016 tournament was held in the memory of Late Rifleman Sandeep Singh Rawat of 6th Garhwal Rifles from Dehradun, who laid down his life fighting the terrorists in the Kashmir valley at Tangdhar in October 2106. Last year, it was held in the memory of Late Havaldar Narendra Singh Bisht of 4th Garhwal Rifles, who went down fighting terrorists in the Uri Sector on 16 September, 2017.
In all, thirteen teams from Government Organisations and the Indian Army, including the hosts UPES, are participating in the event this year, which include Uttarakhand Power Sports Group, Jal Sansthan, PeyJal Nigam, GST Department, Agriculture Department, Income Tax Department, Education Department, Uttarakhand Secretariat, MDDA, Irrigation Department, ONGC and the Indian Army. The tournament organisers include Manish Yagnik, Lokender Dutt Sharma and Manish Madaan.
The inaugural match was played between hosts UPES and the Agriculture Department. UPES won the match and Dr Mohd Yakoot was declared man of the match for scoring 97 runs off only 37 balls. On the second day, two matches were played. The first was between Peyjal Nigam and the Income Tax department. Peyjal Nigam won the match comfortably and Ayush Sharma was declared man of the match for scoring 64 runs off just 40 balls. The second match was played between GST and Agriculture departments, which the GST department won easily. Manjeet was declared man of this match for scoring 53 runs and taking 2 wickets.