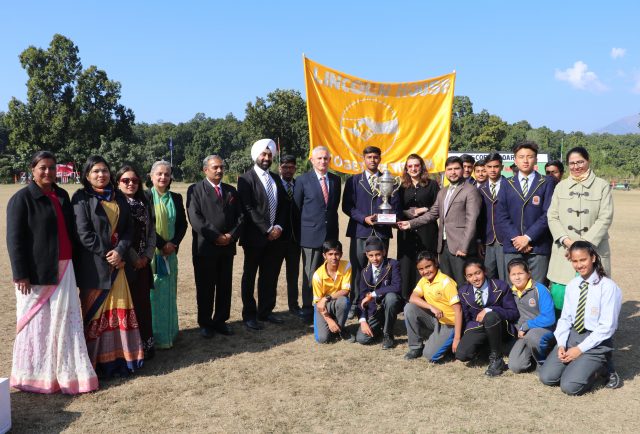 By OUR STAFF REPORTER
DEHRADUN, 14 Dec: The Fourth Annual Sports Meet of Doon International School, Riverside Campus, was held today. The Chief Guest was Brig Steve Ismail and also present were Directors HS Mann and Sonika Mann. The programme commenced with unfurling of the school flag, followed by the Inter House March Past. Sports Captains Danish Raj and Vani Saxena carried the torch, while the Head Boy, Aryan Setu Pillai, administered the oath. The Chief Guest then addressed the students and declared the Meet open.
Field displays, involving mass student participation, included Zumba by the Junior School, PT Drill by the Middle School, and Pyramid formation by the students of the Senior School.
The track events included ‘Fun Races’ for the Junior School, 80 mts,100 mts, 200 mts, 400 mts, 4×50 and 4×100 mts Relays. Parents, gathered in large number, applauded the participants. Students of Riverside Equestrian Academy displayed their riding skills, carrying the school flag and saluting the Chief Guest. Next was a Bhangra dance performance to mark the grand finale of the Sports Event. The closing March Past was followed by the Flag Lowering Ceremony.
The Chief Guest urged students to actively participate in Sports as it teaches self discipline, which is the pre-requisite for learning. He emphasised that, if the mind is aligned with a purpose in life, nothing is impossible to achieve. He gave away the Trophies to the best athletes in different categories. In the Senior Category, Simant Yadav and Rehat Chahal and, in the Junior Category, Nishant Yadav and Thuntita were declared the best athletes in the boys and girls categories, respectively.
The March Past Trophy was bagged by Gandhi House and Lincoln House was adjudged the Overall Sports Champion.
The Sports Meet concluded with the Vote of Thanks proposed by Vice Principal Anita Saini, followed by the National Anthem.