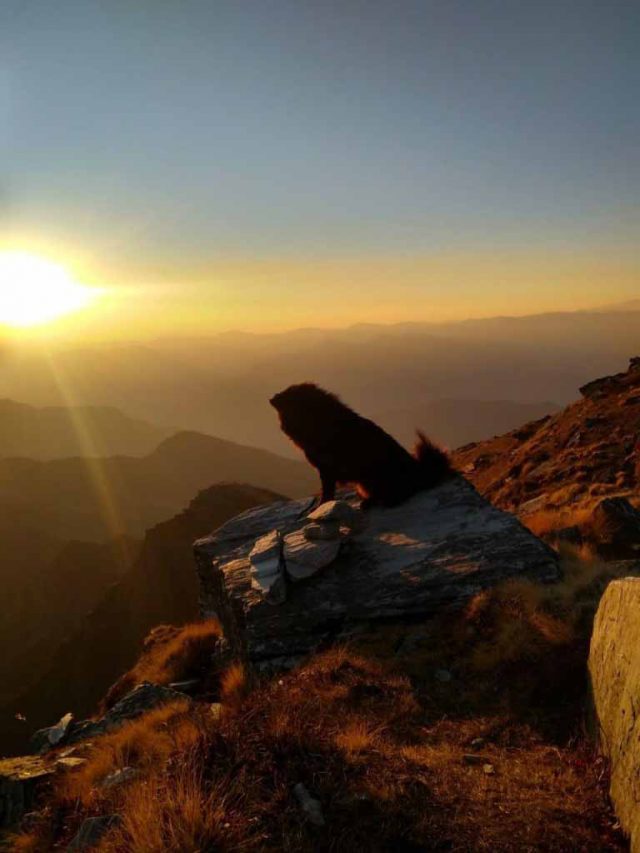 Last time I saw her was on an autumn’s morning, as an eleven-year-old, on my way to school in Balahisar.

‘Ganesh, ma’am,’ I mumbled. “Saili!’added almost as an afterthought. You could have cut that sudden chill with a knife.

“Isn’t he dead yet?’ I let the small tornado of emotion pass.

“No!” I assured her. “He’s doing fine.” Dismissed, I was off down the hill, my schoolbag thumping on my back, louder than my heart.

Returning from school, I told my father the story. Throwing his head back, he burst out laughing: ‘Must have been the old battle-axe Mrs. Hathisingh at Oakless!’ Leaving me me to fill up the blanks.

Behind Himalaya Club, where the ridge of Landour cuts the evening sky, stands Mussoorie Girls Inter College. It’s had colourful people at the helm of affairs, foremost among them was the lady in question.

‘My mother and she, both bred dogs, but hers were of dubious origin,’a dear friend confided in me. ‘She once fought a ten-year case against a woman from Calcutta who had sued her for selling her a black cocker-spaniel, which after a wash or two changed to golden!’

She was unattractive, and had voluntarily taken upon herself the entire burden of the world. Solitary men were attracted to her and Colonel Powell lovingly call her the ‘Neela Rani” or the Blue Queen.Of course it was meant to mean much than that.

The Devil whispers in my ears: ‘She probably nursed a crush on your father!’ In retrospect, I guess, in his youth, the dark, tall man from the hills could have been attractive.

And here was this fellow – all he wanted to do was read an electric meter!

Barely touch the latch, and all hell would break loose – yapping Pekinese, confused Cocker Spaniels would be snapping at his heels. Out on a limb, he complained to the Chairman who threw the book at her.

A man of few words, my father remained the odd man out. His relations with her can only be described in one word – bitter.

Bandhu, the local Kotwalwas asked to look into the case but he too ended up becoming another visitor to Oakless.

One day she passed away in her sleep and a man from Saharanpur turned up, made the funeral arrangements, paid for the cremation and vanished. No one ever did find out who he has. He was there and then he was gone.

Gone too are our fabulous kennels. Take H.H. Rajmata Prithwi Bir Kaur of Jind’s greyhounds –  the pride of the Punjab –reputedly as swift as birds, or Alwar’s Youvrani Mahendra Kumari’s Great Danes: cropped ears, grey, blue and harlequins. They were real traffic stoppers.

Our grey market operator was Bhagwat, employed at the local college, who in his spare time loved dogs or it seemed like he did anyway, if you went by his rounding up of every stray puppy in town. Then he would give them a bucket-bath, put them into a wicker-basket and peddle them on the steps outside the Picture Palace cinema.

‘Bhotiyahain!’ He would declare to unsuspecting customers wanting to take home a puppy from the hills.Only time I remember he got into a bit of flap was when someone took home,what was supposed to be a male puppy. Later it turned out to be a female. Sparks flew!

Down the years we have always had dogs at home. Then the other day I got a call. It was Gauri Uniyal –  a family friend – on the line.

‘I’ve got just the perfect dog for you!’ he announced and turned up a little later on our doorstep, a mutt in tow.

‘Uncle! He’s a Gaddi from the high altitude meadows of Himachal!’ he declares. All I see is a brown mutt.

But my tech-savvy granddaughter Niharika uses Google to declare: ‘That’s a Leopard Hound! We’ve got ourselves a watch dog!’

As I write, the dog looks at me through droopy eyes. But that my friends, is another dog in the manger.