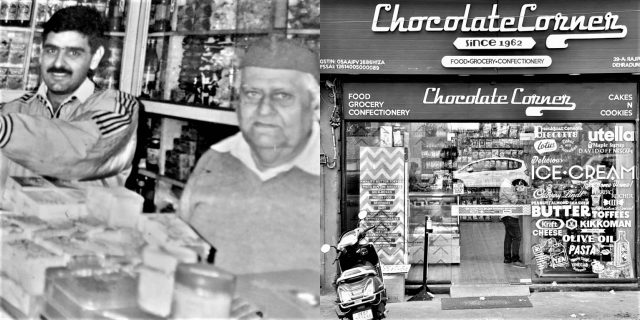 By KULBHUSHAN KAIN
On Rajpur Road, which is Dehradun’s main thoroughfare, is situated St Joseph’s Academy. Opposite its second gate as one moves towards Dilaram Bazaar is a confectionary called ‘Chocolate Corner’. It is no ordinary confectionary. Every schoolboy who studied in St Joseph’s from 1962 onwards has a bit of it in him.

The shop was established in 1962 by the very lovable Mr Vachani. When I was in school, we all called him “Choc Uncle”. Some addressed him “Sai ji”. Chocolate Corner was famous for its “bun samosa”.

The moment the bell rang for the recess – the whole school spilled over towards the gate. The gate was always shut – but Sai ji would be waiting across the gate with two baskets that were made of cane (what are commonly called “tokree” in Hindi.) In one were plain samosas and sliced buns, and in the other were the amazing mutton samosas. Sai ji had a helper who would keep stuffing the sliced, soft, warm, and freshly baked buns with either the plain samosa or the mutton samosas. I remember that the mutton samosas had filling of keema and peas, and the vegetable ones had stuffing of potatoes which were slightly sticky! They were always hot and fresh. The “tokrees” were placed atop a stool, each, and I marvel how just 2 persons could handle the distribution of the bun and two types of samosas for hundreds of impatient schoolboys shouting “Choc Uncle, one mutton samosa” or “Choc Uncle, one plain samosa with bun”. The time was limited, the bun samosa had to be served across the bars of a shut gate, the money had to be collected -and yet, day after day, year after year, during rains, during the hot months and bitter cold winters – the smile never disappeared.

In the 1960s, the vegetable samosa used to cost 50 paise and the mutton samosa Re I (inclusive of the bun). One of either was good enough for a recess snack. The special feature of the samosas was that they were fluffy and soft at the centre, and crisp around their triangular edges. It was as if they were made in heaven.

Apart from popularising bun samosa and helping give it identity as an iconic Dehradun snack (much like what Vada Pav is to Mumbai) what Sai ji unknowingly taught me and many other students was how to manage money.

I remember I used to get Rs 15 a month as pocket money. My mother told me that she would give me enough pocket money for one vegetable bun samosa everyday, with a small surplus to treat my best friends, (since we attended school on a average of 22-25 days a month).

I had to plan on which day to treat my friend/friends! Money had to be spent judiciously. If I wanted to have the keema samosa (which I always wanted to!), I had to have it on alternate days since it cost twice as much as the vegetable samosa! I could choose between having one vegetable samosa every day, or have 15 keema samosas on alternate days, or explore how to juggle my money between the choices I had! From a very young age, I learnt how to plan spending my money. If I lost my money – then that was it! I would not be compensated for it.

There was another lesson I learnt in my tryst with bun samosas! I learnt early that if I took all my pocket money in one go – I ran the risk of becoming “bankrupt” very soon. The temptation to spend it at will left me with no money very early in the month! So, I used to borrow small amounts from my Mom! I learnt how to value money.

Bun samosa taught me the principles of banking. In my entire life, I have never taken a loan or been in debt. I never studied commerce or economics. I never went to a business school. And I am comfortable with my bank balance- I managed it well!

Let me end with a small incident. I was in Mumbai some years ago and made my way to Dadar to have the famous Mumbaikar snack, Vada Pav. After I had finished eating, the kindly and energetic man selling it asked me whether I had enjoyed the Vada Pav of “Aamchee Mumbai”.

“Yes, I have, but whenever you come to Dehradun, contact me and I will treat you to our bun samosa. It tastes better,” I said and pushed my visiting card into his hand.

I was speaking the truth! I still maintain that the bun samosas of Dehradun (of the sixties when I was in school) were better than any I have had anywhere in my life.

Sadly, Sai ji passed away some years ago. Chocolate Corner no longer sells bun samosas – but the memories remain.

(Kulbhushan Kain is an award winning educationist with more than 4 decades of working in schools in India and abroad. He is a prolific writer who loves
cricket, travelling and cooking. He can be reached at
kulbhushan.kain@ gmail.com)