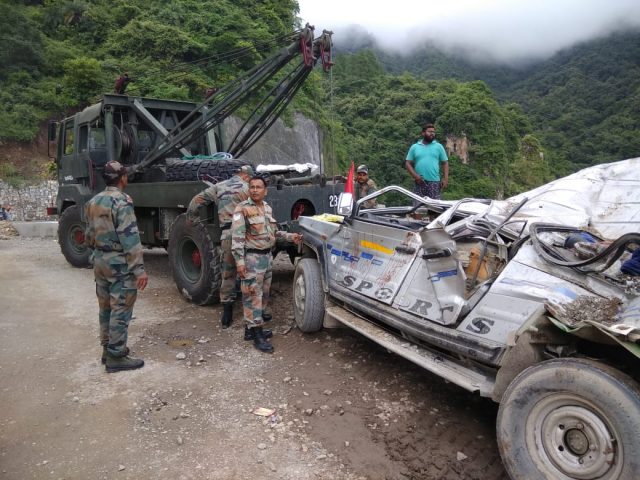 DEHRADUN, 29 Jul: A civil tempo carrying Kanwariyas was hit by a landslide at Bagardhar (5-6 kms from Narendranagar on the Tehri road). The District Administration requested assistance from the Army for rescue operations. A Column of three officers and 43 Jawans of the Army located at Narendranagar, including the Commanding Officer, reached the site and, in a joint operation, 11 civilians including three in critical condition were evacuated to civil hospital by the State Police. The column from the unit swung into action to search and rescue one civilian who fell into a deep nullah from the roof of the vehicle. Meanwhile, a team of SDRF reached the site and joined the efforts. The civilian person was found dead approximately 70 metres below the accident site and the mortal remains were recovered by a joint team of the Army, SDRF and Police. A total of eight civilians survived, while four succumbed to injuries.