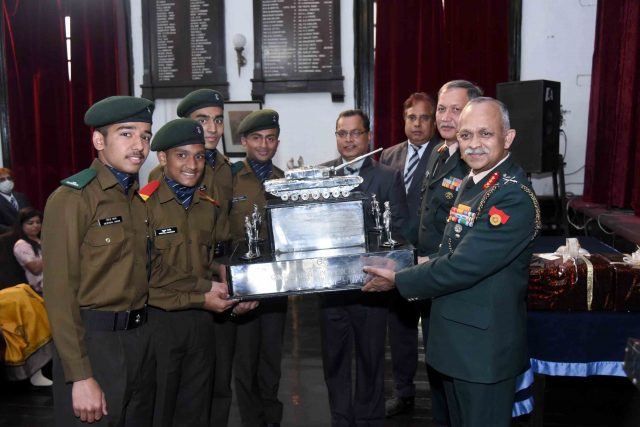 Dehradun, 12 Mar: Vice Chief of Army Staff Lt Gen CP Mohanty arrived at his Alma Mater, RIMC, on the eve of the 99th Founder’s Day, here, today. On his arrival, the Vice Chief inspected Guard of Honour commanded by Cadet Captain P Navaneeth. A wreath laying followed by the Cadet Captain, the Commandant and the Vice Chief at the War Memorial for Rimcollian Martyrs.
A Cultural Programme was held at the Bhagat Hall. The Emcees, Cadet Aarush and Cadet Bharat anchored the show. The show began with Cadet Zodinsanga and his Band performing ‘Don’t Look Back In Anger’. Next followed a Sufi mish-mash by Cadet Rishaan Gupta, in sync with the cadets’ orchestra. The comical adaptation of ‘Kaun Banega Crorepati’ was an ingenious creative parody of a Cadet and life at the RIMC. There was never a dull moment, especially when Cadet Ayush Rathore turned a faux pas to his advantage, sending the audience into splits of laughter. The script writers and actors of the drama were Cadet Nakul Rathore, Cadet Ayush Rathore and Cadet Vansh Saroha with Pramod Sharma as the Director. A pulsating dance number followed.
The Commandant presented the annual report of the pandemic riddled 2020 that made RIMC emerge stronger. Various awards were presented to the cadets and sections. The Gen VN Sharma Overall Championship Trophy went to Shivaji Section. Some awards were given away to the Rimcollian Cadets at the NDA to be dispatched later.
A set of books was presented to the Commandant by the Chief Guest for the Somnath Library along with a Memoir of Remebrance.
In his address, Lt Gen C P Mohanty, who was in the Shivaji Section, began by saying that he was pleased to give away The Overall Championship Trophy as one ‘Shivajian’ to another. He recalled that he had joined as a Cadet in 1973, in times sans telephones, radios and modern modes of transport. He was the only boy who had come from a village in Orissa, unable to communicate in English or Hindi. He had never played any games. He said, ‘RIMC is a tough father. It teaches you in the most difficult way and challenges you.’ By the second term, since the parents could not be contacted due to lack of phones, his teacher, LN Thakur remarked, ‘This boy daydreams.’ The second term became a turning point, when he slogged, played every game – X-Country, Basketball, learnt at night ensuring that his vulnerability was combated. Inspiring the Cadets, he urged them to distinguish wheat from chaff and retain the substance. He added that he owed a debt to the walls and boards of the historic Bhagat Hall as RIMC is the fire that forges steel. It was very important to be a good human being and success would naturally follow. Loyalty, integrity, honesty and commitment ought to be the USP of a soldier. There were no miracles, only hard work. He concluded that the bond between the teacher and the taught transcended well beyond the classroom walls, as the Masters were character builders.
He later visited the Hobby Display, appreciating the Art and Craft, Alchemist, Photography, Aeromodelling, Journalism and Shooting Hobbies. Tea followed with a Group Photograph and Guest Lunch at the Cadets’ Mess.