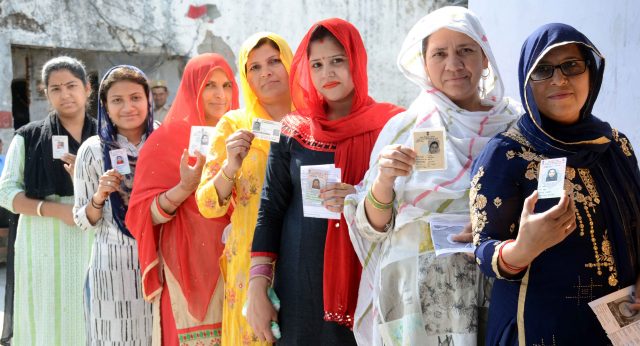 Dehradun, 11 Apr: Around 57.85 percent polling was held today till 5 p.m. in the five parliamentary constituencies of Uttarakhand. This figure is tentative and may go up a little beyond 60 percent in the final tally. Counting of votes will be held on 23 May and the results are expected on the same day. According to the Chief Electoral Officer, Saujanya, polling in Uttarakhand’s five Lok Sabha seats saw 46.59 per cent voter turnout till 3 p.m. today. As per the information made available by the State Election Office, Tehri Parliamentary constituency saw a voter turnout of 12.90 percent by 9 a.m., 28.32 percent by 11 a.m., 40.60 by 1 p.m. and final turnout of 54.38 percent at the time polling ended. Pauri constituency saw a voter turnout of 10.83 percent by 9 a.m., 27.2 percent by 11 a.m., 38.51 percent by 1 p.m. and a final polling of 49.89 percent at the end of the polling in the evening. Almora seat had a voter turnout of 10.7 percent in first two hours till 9 a.m., 25.15 percent by 11 a.m., 36.2 percent by 1 p.m. and a final voter turnout of 48.78 percent. Nainital-Udham Singh Nagar seat had 14.8 percent polling in the first two hours till 9 a.m., 32.35 percent polling by 11 a.m., 48.02 percent polling by 1 p.m. and a final polling figure of 66.39 percent at the end of polling. Haridwar seat had polling of 15.37 percent by 9 a.m., 33.2 percent by 11 a.m., 48.67 by 1 p.m. and a final polling percentage of 66.24 percent. District wise, the voter turnout till 3 p.m. was 51.22 percent in Dehradun, 58.95 percentage in Udham Singh Nagar, 63 percent in Haridwar district, 41.3 percent in Tehri, 38.85 percent in Uttarkashi, 39.56 percent in Almora, 40 percent in Chamoli, 44.26 percent in Champawat, 39.6 percent in Pithoragarh, 52.96 percent in Nainital, 44.88 percent in Bageshwar and 44.32 in Pauri. A total of 46.59 percent of voters had exercised their franchise by 3 p.m. in the state. It may be recalled that a total of 52 candidates are in the fray for the five Lok Sabha seats in Uttarakhand whose fate was to be decided by over 78 lakh voters. Currently, all the five seats are held by the ruling BJP. Congress had failed to win a single seat in the 2014 parliamentary polls from Uttarakhand. Polling began at 7 a.m. peacefully though at certain polling stations in district Haridwar and Dehradun, problems were reported in the EVMs and VVPAT machines and, in those polling booths, polling was stalled till the replacement of the defective machines, which took between half an hour to an hour. In Dehradun, some voters were seen going back without casting votes instead of waiting for the replacement of the defective machines. However, by and large, the polling went smoothly. According to the State Election Office, a total of 330 VVPAT machines were replaced today due to some defect. The BJP is locked in straight contests with the Congress on four seats whereas it appears to be triangular contest in Haridwar constituency where BSP is posing a strong challeng. It may be recalled that BSP Supremo Mayawati had addressed a public rally in Haridwar some days ago. In Uttarakhand, there is a straight contest between ex-chief minister Harish Rawatand and state BJP chief Ajay Bhatt in Nainital, ex-CM Ramesh Pokhriyal Nishank and Congress’s Ambrish Kumar in Haridwar. Similarly, BJP national secretary Tirath Singh Rawat is locking horns with his political mentor BC Khanduri’s son Manish Khanduri in Pauri, while it is another straight contest between sitting Lok Sabha MP Ajay Tamta and Rajya Sabha MP Pradeep Tamta (Rajya Sabha) in Almora. Incidentally, both, Harish Rawat and his current rival Ajay Bhatt had lost the 2017 assembly polls in the state with Harish Rawat losing from Haridwar Rural as well as Kichha (US Nagar) and Ajay Bhatt from his traditional Ranikhet seat. Therefore, stakes are very high on this seat. It will be a major loss for both but a bigger personal loss for Harish Rawat since he is senior in age and experience as a loss would dent his political career forever, whereas a second straight loss for Bhatt could shake his chair of BJP State President. Congress candidate from Haridwar, Ambrish Kumar is an ex-MLA. Pradeep Tamta is a Rajya Sabha member with four years of term still left and, if he wins, Congress stands to lose one Rajya Sabha seat which is bound to go to the BJP, as it is in a brute majority in the Uttarakhand Assembly. Hence, Pradeep Tamta has nothing to lose if he loses the Lok Sabha poll, but if he wins, he will gain an extra year of membership in Parliament.