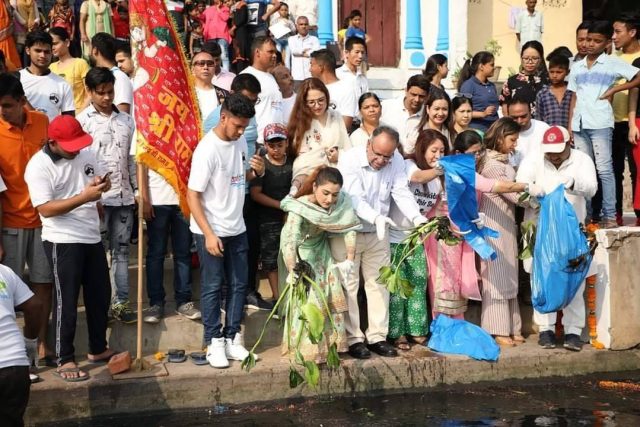 By OUR STAFF REPORTER
DEHRADUN, 2 Jan: India’s well-known Kathak dancer and national convenor of Sparsh Ganga campaign,  Arushi Nishank has been selected for the Earth Day Network Star 2020 by Earth Day Network, a worldwide Earth Day organization.
Arushi has received many accolades for her achievements in the country and abroad. Prominent among them are Youth Icon Award (Dubai), Uttarakhand Gaurav Samman, Bharat Gaurav Samman, Adhi Abadi Achievement Award, Top 20 Global Women Award, Atal Maharishi Shikhar Samman etc.
Along with this, she is constantly active in women’s empowerment and the social sector. Arushi is a famous Kathak dancer of India who has performed in many countries of the world. She is also into film production. Last year, the film “Major Nirala” made by her was quite popular.
The Earth Day Network organization has been organizing Earth Day since the year 1970. In more than 190 countries of the world, more than seventy thousand workers are pursuing this environmental consciousness campaign. Fifty years on, the organisation is recognised as a central actor in the worldwide fight against climate change with ongoing engagements in 190 countries and with over 50,000 organisations.
Ms. Arushi is the national convenor of Sparsh Ganga campaign. This campaign, dedicated to the cleanliness, conservation, and augmentation of Ganga and its tributaries have been continuously carried out throughout India for the last decade. Also, more than a dozen countries of the world are associated with this campaign.