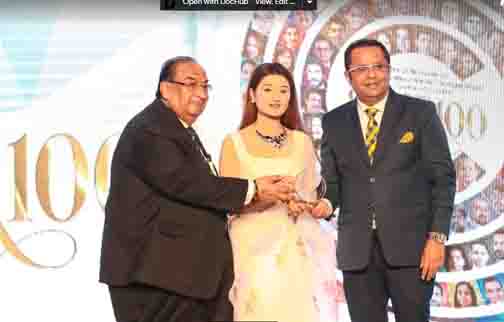 Dehradun, 30 Apr: Once again, Arushi Nishank has made Uttarakhand proud by being featured in the Super 100 Next Gen with her achievements and profile.
Arushi has already been featured in Forbes Middle East for her social and cultural work and example of women empowerment.
Super 100 Next Gen is a world famous book which included 100 top most profiles of youngster from all over the world who have achieved something big at a young age. Arushi Nishank has been included for working in the field of women empowerment, environment and spreading Indian art and culture in the world. The book was launched in Dubai with prominent people of UAE.
Asked about how she felt about the international recognition, Arushi Nishank, she said, “Everyone has their own journey, likewise mine also want very easy. When you have a great father, you have greater challenges.”
“Bargad ke ped ke neeche chhote paudhe nahi panapte” and that was my biggest challenge. I tried to push myself at each phase to be a more substantial person,” she declared.
Arushi Nishank is a famous international Kathak exponent, who has performed in more thean 15 countries. She is also a film producer, social worker and entrepreneur.
She is a promoter of Namami Gange and brand ambassador of Sparsh Ganga.
Arushi Nishank sets an example for youth and women, among whom she has a great fan following. Super 100 Next Gen was conducted at Palm Jumeirah, Dubai, where the Indian Counsel General Vipul, Biju Nina, Paras Sahadatpuri, Vasu Shroff, Dubai Cultural Head, and many prominent personalities were present.

Garhwal Post has established itself as a credible, balanced and forward looking newspaper in India. Based in Uttarakhand, the daily is read by the aware, socially and culturally responsible, high-income elite of society.
Contact us: info@garhwalpost.in
senior dating sites scotland