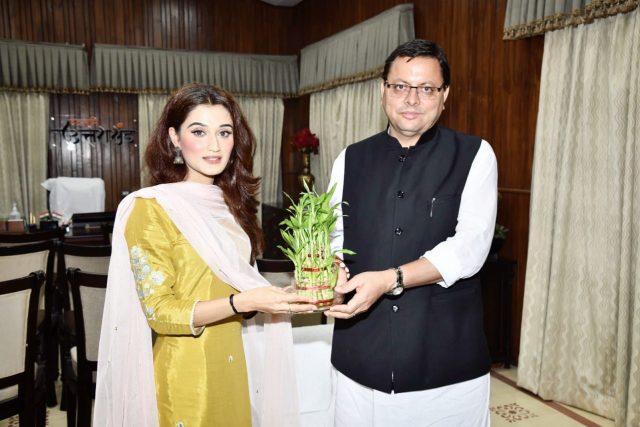 DEHRADUN, 26 Sep: Arushi Nishank, actor, film producer, environmentalist, Kathak exponent and cofounder of Sparsh Ganga, called on Chief Minister Pushkar Singh Dhami. Arushi Nishank discussed the introduction of more flexible policies so that a larger number of films and web series can be shot in Uttarakhand. She briefed the CM on her new web series which revolves around Uttarakhand’s people and villages. It will soon be released on the OTT platform. Arushi Nishank is the daughter of Haridwar MP and former Education Minister of India, Dr Ramesh Pokhriyal ‘Nishank’. She made her debut with the T-Series Music video ‘Wafa Na Raas Aayee’ which has crossed 225 million views on the T-series official YouTube channel.

Arushi Nishank always seeks to break through the stereotype and comes forward with new opportunities to empower women, particularly of Uttarakhand. Due to initiatives taken by Arushi, more than 2000 women have got employment in Uttarakhand under the circular economy model. Himshrri Films and TSeries have together announced the upcoming project Tarini. Tarini is the first to embark on a maritime journey in the world, a film based on six women officers of the Navy. The production of the Tarini film based on these six women navy officers is going to start soon. The project was announced on 8 March, 2021, together with Himshri Films and T-Series. The cast of the film could include Tapsee Pannu and Sara Ali Khan. Famous film writer Prasoon Joshi has mentored the writing team of Tarini. Arushi Nishank is making her debut with the film Tarini. Arushi Nishank is also constantly active in the field of women empowerment, the social sector, and environmental protection. She is also the national convenor of the Sparsh Ganga Abhiyan.