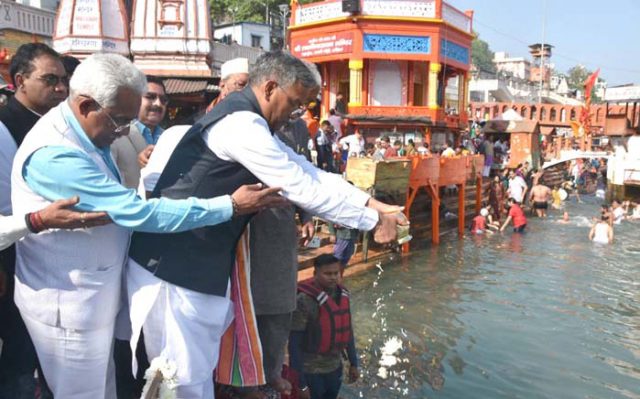 Dehradun, 20 Nov: Chief Minister Trivendra Singh Rawat attended the immersion of the ashes of former Union Minister, the late Ananth Kumar at Har-ki-Pauri, Hariwdar, on Tuesday. While paying homage to Ananth Kumar, the Chief Minister fondly remembered that he was a true well-wisher of Uttarakhand. He wanted to do a lot for the state.

He recalled that Kumar had said he would be extremely happy to grant approval to the proposals sent to his Ministry by the Uttarakhand Government. While recalling his visit to Uttarakhand, the CM said that, in July, CIPET was inaugurated by Kumar in Doiwala. He also gave 833 acres of IDPL land free of cost to Uttarakhand, a plastic recycling unit for Doiwala, approval of Plastic Medical Devices Park in Sitarganj and approval of 100 additional centres for generic medicines in Uttarakhand, which reflected his special attachment to Uttarakhand. The Chief Minister said that Kumar would always remain in the hearts and memories of the people of Uttarakhand.

Garhwal Post has established itself as a credible, balanced and forward looking newspaper in India. Based in Uttarakhand, the daily is read by the aware, socially and culturally responsible, high-income elite of society.
Contact us: info@garhwalpost.in
elite dating websites uk free hookup sites in michigan date in asia online