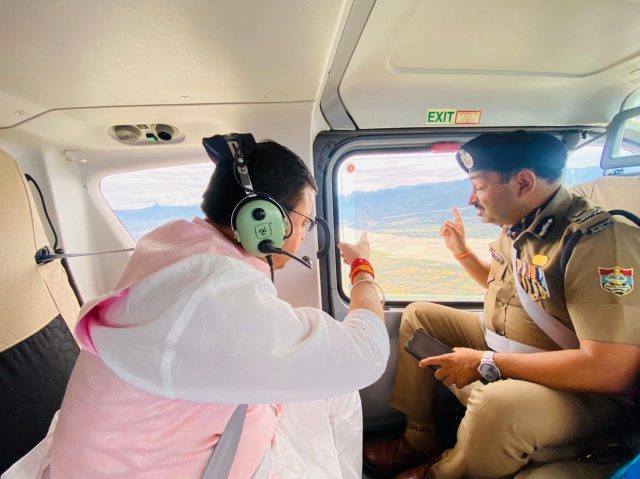 Dehradun, 19 Oct: Heavy rains have wreaked havoc in Uttarakhand. At least 25 persons are reported to be dead in various incidents caused by the incessant rains. Even as the approach bridge to Nainital, built over the Gaula River was swept away, all the three highways leading to Nainital witnessed landslides and flooding leading to total cutting-off of Nainital town from the rest of the country.
Secretary, Disaster Management, SA Murugesan has confirmed that at least 25 persons have died over the past two days in various incidents. Of these, 6 had died yesterday while the remaining died today.
Chief Minister Pushkar Singh Dhami undertook an aerial survey of the disaster affected regions of the state and also reached Nainital for an onsite physical inspection of the flood affected area. Prime Minister Narendra Modi also spoke to Chief Minister Dhami, today, and Union Minister of State and Nainital MP Ajay Bhatt also enquired about the situation.
The State Emergency Response Control Room released a bulletin this evening, according to which village Totapani in Mukteshwar Tehsil area of Nainital district was flooded with water due to excessive rains and a house was totally damaged. Five persons died while 1 was injured.
The entire area of Ramgarh’s Talla has been submerged in rain waters since late last evening. More than 150 persons were stranded, as were 3 Uttarakhand Transport Corporation buses and some private vehicles. Residents were forced to go up to their rooftops and seek help and rescue. The NDRF, SDRF, the local police and administration conducted a rescue operation following which the stranded persons were evacuated. However, 9 persons are reported to be dead and one injured there as per the bulletin issued this evening. The excessive rain is reported to have led to a cloudburst in Doshapani and Tishapani in Dhari tehsil of Ramgarh, Nainital district. During this, the retaining wall of a workers’ hut collapsed. Seven people were buried under the debris.
In Nainital city, due to heavy rains, many places have been flooded. Naini Lake is also reported to be overflowing. A crack of about two inches is reported at the Tallital intersection. As soon as the information was received, the SDM and CO reached the spot. Army personnel rescued the people trapped inside the shops due to the strong flow of water on Cantt Road.
In village Hiradungrai under Tehsil Bhikiyasain of Almora district, too, 1 person was reportedly killed in a landslide, while a house was fully damaged. A landslide at Khairna near Kainchi Dham killed two persons, both of them labourers, while one hut was damaged. Two persons were killed in village Chauhuta in Tehsil Dhari of district Nainital, even as 5 persons are reported to be missing. One house was fully damaged due to the landslide there. In all, at least 18 persons were reported to have died in these two districts in the past 24 hours due to excessive rains, and at least 6 persons are reported missing.
In Telvad of Champawat, a person was hit by a landslide. While one person died, three others were safely evacuated. At the same time, some people are still trapped in the debris. A youth died after being buried under the rubble in Telwara, Champawat.
The Kosi River is reported to be flowing above the danger mark. Garjiya temple of Ramnagar was threatened due to rising waters in Kosi River. The water has reached the steps of the temple. All the gates of the barrage have been opened. The water in the Kosi barrage is at 1,39,000 cusecs, which is well above the danger mark. The danger mark at Kosi barrage is 80,000 cusecs.
In Tanakpur, the Sharda River is reported to be in spate. The water level of Gola River increased on Tuesday morning, due to which the approach bridge was broken. On receiving information, officials of the administration and NHAI took stock. The Gola Barrage has become a threat due to the rise in the water level of the river. Due to the rain, a drain also overflowed, due to which a house built on its banks was washed away.
Although in Dehradun the weather was clear but the water level of the Ganga in Rishikesh and in Haridwar was flowing over the danger mark due to heavy rains in the hills in the past 48 hours. The water level in Haridwar had increased significantly this morning and, therefore, the district administration is on alert mode. The danger mark of the barrage is at 294 metres. In Rishikesh, the Ganga was flowing just 20 cm below the danger mark. Various Ganga Ghats including the Aarti site of Triveni Ghats have been submerged. The administration is shifting people living by the river to safer places. The water level of the Ganga in Rishikesh has reached 340.30 metres. The Ganga has reached the warning mark very close to 340.50 metres. The Central Water Commission has alerted the administrations in the districts of the plains.