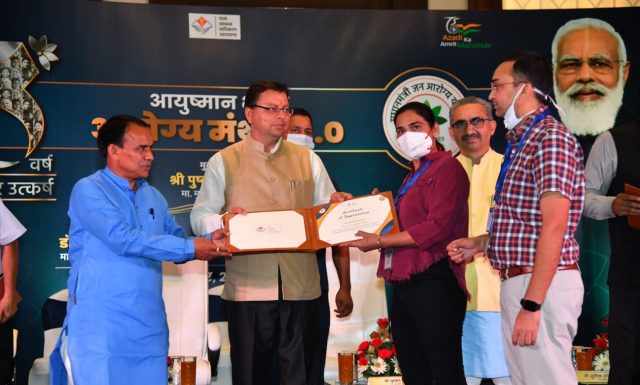 By Our Staff Reporter
Dehradun, 23 Sep: Chief Minister Pushkar Singh Dhami announced, today, that no charges would be levied for making Atal Ayushman Cards in Uttarakhand. He was speaking as the Chief Guest at a function, ‘Arogya Manthan-3’, organised on the third anniversary of the Ayushman Bharat scheme.
Dhami said that, henceforth, people would not have to pay any fee to get their Atal Ayushman Cards made. This would be paid by the government. He also promised that all the problems with respect to Atal Ayushman Cards would be resolved soon.
The programme was held at a hotel on Haridwar Bypass Road, here, today. The CM reminded that all the families of the state had been included in the Atal Ayushman Uttarakhand Yojana in the state. Under this scheme, so far, about 3.5 lakh people have had their treatment done for free in the state, on which an amount of Rs 460 crore had been spent by the government.
Chief Minister Dhami reminded that such a scheme had been brought for the first time in independent India and was a major relief for the common people. The scheme had enabled access to quality health facilities and services for the general public. Earlier, if a person was admitted in a hospital, the financial condition of the entire family would deteriorate. The families had even to mortgage land, property or jewellery in order to get the treatment. Under these circumstances, earlier, many families were unable to pay the bills if someone in the family was ill and the patients felt uncomfortable in seeking treatment. Now, this scheme had resulted in major support for the people who are not well off. Admitting that there were certain shortcomings in the scheme, Dhami promised that all these would be dealt with and removed altogether.
The CM added that some hospitals had brought to his notice that there were delays in the payment due to them from the government. He promised that all hospitals would be paid their dues within seven days.
Dhami said that Prime Minister Narendra Modi had gifted the world’s largest Ayushman Bharat scheme in the field of health to the country. Under the leadership of Prime Minister Modi, the country was progressing rapidly in every field. He said that the country has progressed rapidly in the direction of self-reliance. He expressed his gratitude to the Centre on behalf of the people of Uttarakhand for coming out with this important scheme in the field of health. He reiterated that the general public was getting the direct benefit of this scheme. Commendable work had been done in the country in the field of health facilities. A mega Covid vaccination campaign was going on in India. Following the footsteps of Prime Minister Modi, development works were being carried forward in the state.
Health Minister Dr Dhan Singh Rawat said that, on opening of private hospitals in hill areas, the government would provide financial support along with relaxation in standard requirements. For wide publicity of Ayushman Bharat and Pradhan Mantri Jan Arogya Yojana, boards of information related to the scheme would be installed in all the empanelled hospitals. Camps would be organised at the block level by the department to provide Ayushman cards to the people.

Garhwal Post has established itself as a credible, balanced and forward looking newspaper in India. Based in Uttarakhand, the daily is read by the aware, socially and culturally responsible, high-income elite of society.
Contact us: info@garhwalpost.in
free meet up sites https://garhwalpost.in/connecting-singles-women/