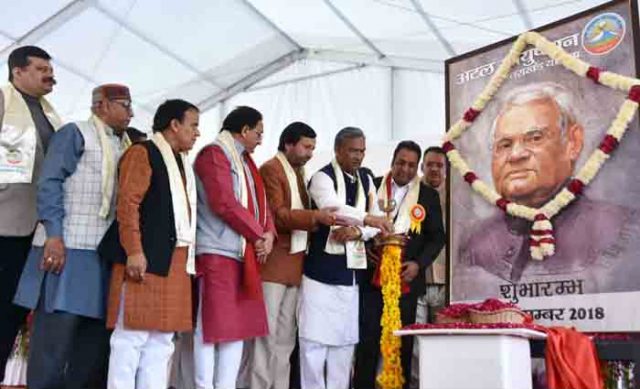 DEHRADUN, 25 Dec: On the occasion of the birth anniversary of the former Prime Minister, the late Atal Bihari Vajpayee, Chief Minister Trivendra Singh Rawat launched the “Atal Ayushman Uttarakhand Yojana”, here, today. With this, Uttarakhand has become the first state where all the residents will be provided free health security by the state.
The Chief Minister distributed golden cards to the beneficiaries on the occasion. In his presence, MOUs with empanelled hospitals for the scheme were also exchanged. The Chief Minister also announced opening of free OPDs for children and the elderly, and the start of dedicated air ambulances in the entire state from 26 January.
There was a huge rush of people at the launch function held at the Bannu School ground, here. People queued up at the counters to get registered for the Yojana and get golden cards.
The Chief Minister also formally inaugurated the website and app of “Atal Ayushman Uttarakhand Yojna” on the occasion. He also distributed golden cards to several beneficiaries.
Addressing the large gathering, the Chief Minister said that the state government was working along the philosophy of doing good for everyone. As Uttarakhand has tough geographical conditions, the government was trying to use technology and started tele-radiology, tele-medicine facilities in health centres located in far off places.
Pointing out that Prime Minister Narendra Modi had started the “Ayushman Bharat Yojana”, he said Uttarakhand had taken inspiration from him and started a similar scheme for every resident of the state. None would be deprived of medical treatment due to paucity of funds. Taking into consideration the problems associated with insurance, the scheme would be run in trust mode. Every effort had been made to make the scheme simple.
He reiterated that 23 lakh families would be benefitted. A total of 99 government and 66 private health institutes had been identified, thus far, for the scheme and people would get treatment for 1350 serious ailments. Government hospitals would be given incentives. He expressed the hope that in future private hospitals would come forward to provide health facilities in far off places in the state. Accredited journalists would also get the benefit of the scheme like state government employees.
Haridwar MP Dr Ramesh Pokhriyal ‘Nishank’ congratulated the Chief Minister on the launch of the scheme. He said the Prime Minister was taking India ahead and Uttarakhand was also contributing to it. MP Mala Rajyalaxmi Shah also spoke on the occasion. State BJP Chief Ajay Bhatt also congratulated the Chief Minister for launching the scheme. He shared memories of former Prime Minister Atal Bihari Vajpayee.
The programme was chaired by Vinod Chamoli, MLA. Present on the occasion were Cabinet Minister Prakash Pant, Higher Education Minister of State Dr Dhan Singh Rawat, MLAs Harbans Kapoor, Ganesh Joshi, Kunwar Pranav Singh Champion, Sahdev Singh Pundir, Khajan Dass, Umesh Sharma ‘Kau’, Mahendra Bhatt, Munni Devi Shah, Dehradun Mayor Sunil Uniyal ‘Gama’, Chief Secretary Utpal Kumar Singh, State Health Authority Chief Dilip Kumar Kotia, DGP Anil Raturi, Additional Chief Secretary, Radha Raturi, Secretary Nitish Jha, officials, public representatives and other dignitaries were present on the occasion.