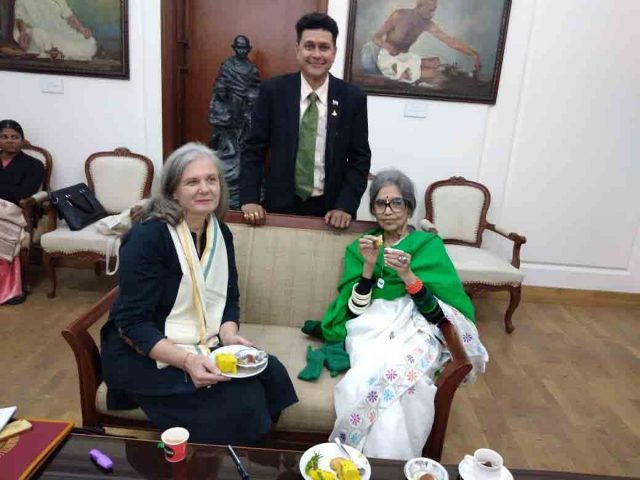 It is indeed my misfortune not to have seen or met
Mahatma Gandhiji.I visited his Samadhi at Rajghat several times during my formative years at the Modern School, Barakhamba Road, New Delhi, where Gandhiji visited in 1936.
I also was taken to the Gandhi Smriti housed next to Rajghat many a time.
I got interested in understanding the man Mohandas Karamchand Gandhi through his autobiography, “My Experiments with Truth”, while I was doing my Masters in History from the pristine St Stephen’s College, University of Delhi.
I started practicing singing Bhajans from his favourite personal collections of Bhajans through a small carry book,” Ashram Bhajnawali”.
My favorite bhajan is ‘Vaishnav Jan Toh Te nere kahiye je peer paraayee Jane re’
Par dukhe upkaar kare mohe man abhimaan na aane re’, which I have begun to sing while I write this article happily and joyfully.
One fine year in the early 1990s, I had established a film production company for documentaries and corporate films. I approached Bhuvan Lall, my schoolmate who was heading SRISHTI channel.
Bhuvan has authored a beautiful book, titled ‘The Man India Missed the Most’ on the life of Netaji Subhash Chandra Bose.
It was Bhuvan who suggested that I make short capsules on “Thought for the Day” as collected by Mahatma Gandhi for 365 days.
I went to pick up the book from Khadi Bhawan, Connaught Place.
We took permission to shoot at the Gandhi Smriti at the Tees January Marg in New Delhi, where I shot the entire premises and sat down to meditate there.
In the buzzing roads of traffic, there houses an Eternal Cosmic and Universal Peace in all the places where Gandhiji still resides.
The capsules which ran daily on SRISHTI channel were really liked by the viewers. There was a ‘Thought for the Day’ at the end of each capsule in Hindi and in English, both, through Graphics in Text format.
The capsules were laden with the black and white footage of Gandhiji, which we had obtained permission to use.
I thoroughly enjoyed creating and curating these capsules and went on to proudly keep the book, which is in my study at home even to this date.
In my opinion, Mahatma Gandhi was not a normal human being. He was much above the normal. He was a Puritan Soul who lived and tried to discover himself on a daily basis through a pure regimented life.
He experimented first on himself and then went on to share his learnings with others.
Gandhiji to me is a Philosophy and Philosophies are eternal. They do not die.
Albert Einstein was so correct in his understanding of Mahatma Gandhiji. “It would be difficult for generations to believe that such a man walked in flesh and blood upon this earth.”
I could not agree more.
Mahatma Gandhi led the Indian National Independence Movement from the front, fearlessly and selflessly.
Along with thousands of Indians who followed him, he welcomed the divine presence.
Today, we proudly celebrate his 150th Birth Anniversary.
I have paid my homage last year by being amongst the 100 signatories for KHADI.
Recently, I visited the Gandhi Smriti to pay my tributes to Mahatma Gandhiji.
I have had the proud privilege of meeting Tara Gandhi Bhattacharya, the grandaughter of Gandhiji.
It was out of sheer respect that the entire nation gave him the Title of Mahatma, rightfully and dutifully.
He came from an Atma to become a Mahatma, while he never claimed to be so himself.
Gandhiji ko koti koti naman.
Jai Hind