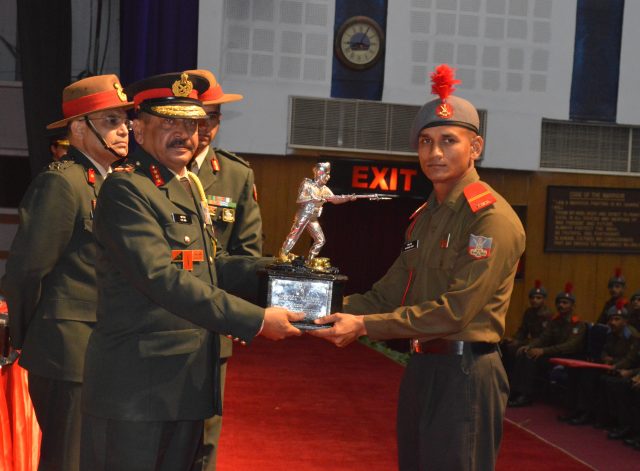 DEHRADUN, 5 Dec: The Award Ceremony of the Passing Out Course of 143 Regular, 126 TGC was held at the Khetrapal Auditorium, IMA, here, today. Lt Gen SK Jha, Commandant, Indian Military Academy, bestowed recognition and awards on outstanding Gentlemen Cadets who excelled in various fields during their pre-commission training at the Academy.
Gentlemen Cadets during their training at this premier institute are exposed to multifarious activities such as Weapon Training, Service and Academic Subjects, Drill, Physical Training, Sports, Outdoor Camps and extracurricular activities. These are aimed at making them battle ready and teach them necessary skills to execute various responsibilities and operational tasks with utmost professionalism during their service career.
Gentlemen Cadets are also encouraged to achieve excellence at the individual level and contribute constructively in team effort to infuse a sense of comradeship amongst them. Accordingly, Medals and Rolling Trophies have been instituted at IMA, which mark the highest standards achieved at the Individual and Company levels.
Among the numerous awards presented, today, were the Motivation Trophy for the Most Motivated GC of the POC went to BCA Bhaskar Narayan Gogoi.
Among the Rolling Trophies, the Admiral Sushil Kumar, Chief of Naval Staff Trophy for the Company Standing Overall First in Professional Competition went to Basantar Company. The Army Commander ARTRAC Banner for Company Standing Overall Second in Inter Company Championship was also awarded to Basantar Company. The Kumaon Trophy for Company standing Overall First in Inter Company Championship went to Sangro Company.
In his address, the Commandant mentioned that it was important for an officer to maintain a competitive streak within the parameters of sportsmanship and fair play at all times. He mentioned that the urge to win and excel as a team should always be there. In the profession of arms, it was always a collective and team effort that was important and there were no runners up in war.
Officiating Vice Chancellor, Uttarakhand Technical University, BK Singh was also present to Award Diplomas in Military Strategy & Defence Management to Gentlemen Cadets of Friendly Foreign Countries.