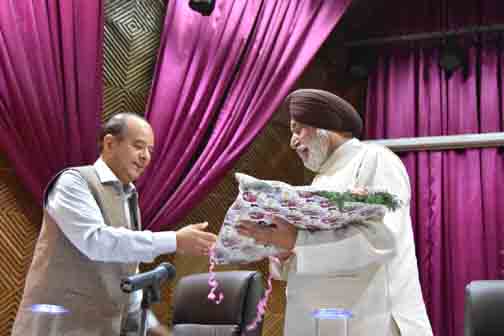 By OUR STAFF REPORTER
Nainital, 3 Jun: A three day seminar began at the Administrative Academy, here, for officers from all the districts as well as the state secretariat, today. The Chief Guest at the inaugural session was the former Chairman, Commission for Minorities, Narinder Jit Singh Bindra, who opened the session by lighting the ceremonial lamp along with the Director of the Academy, AS Nayal, and Additional Director Poonam Pathak.
Bindra delivered the keynote address on the topic of the seminar, “Sensitisation of Government Functionaries on issues relating to Minorities”. This programme has been sponsored by DOPT, Government of India. Bindra presented historical facts and further the provisions in the constitution that protect the rights of minorities. He elaborated on details of the Sachar Committee, the Prime Minister’s 15 point programme for Minorities, role of the National and State Commissions, and achievements of the Uttarakhand Commission for Minorities. He emphasised on the need to have more awareness of the rights of the minorities in a democracy. He said he was sure that every good human was sensitive towards not only the minorities but also towards other weaker sections of society. More than anything else, awareness was required. The session concluded with the ADI thanking the Chief Guest and all the other participants.