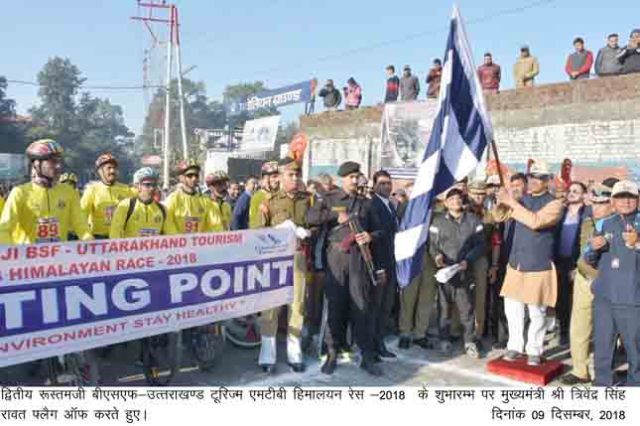 By OUR STAFF REPORTER
DEHRADUN, 9 Dec: Chief Minister Trivendra Singh Rawat said that the contribution of the people of Uttarakhand for the environment is inspiring for the whole world. He said that Uttarakhand is fortunate for giving environmentalists like Gaura Devi, Kalyan Singh, Vishweshwar Dutt Saklani, Jagat Singh Jangli, Sunderlal Bahuguna and Anil Joshi to the world, who immensely worked for environmental protection. Chief Minister said that it is a matter of great happiness that thousands of people have come forward to participate in the state government rejuvenation campaign of Rispana and Kosi Rivers. Any campaign becomes successful only with extensive public support.
Rawat said that people should understand that every campaign being run by the government and society is their work and then only it can be successful. Chief Minister further added that today, big cities and metros are becoming gas chambers because of pollution. In this scenario, awareness towards environmental protection and environment is important for everyone’s life. Thousands of deaths are being reported today due to polluted environment. Urban areas and metros like Delhi are passing through a big environmental crisis. Under such circumstances, the importance of a Himalayan state like Uttarakhand has increased; our clean environment is our precious heritage. Rawat was addressing the inaugural function of 2nd Rustamji BSF-Uttarakhand Tourism MTB Himalayan Race – 2018 organised under ‘Save Environment-Stay Healthy and Women Empowerment’ campaign, under the aegis of BSF Institute of Adventure and Advance Training Doiwala Dehradun and Uttarakhand Tourism Department at Parade Ground, Dehradun on Sunday.
While giving best wishes to BSF and Uttarakhand Tourism for the cycle race organized for the purpose of environmental protection and empowerment of women, Rawat said that this rally is important for enhancing environmental awareness during the time of environmental crisis. This effort of BSF and Uttarakhand Tourism will present a new dimension in the field of adventure sports in Uttarakhand and will open the vast potential of scenic beauty and elegance of Uttarakhand along with adventure sports at the world level. This will also help state capabilities such as Paragliding/Water Sports/Skiing/Tracking/ Mountaineering and other adventure games being promoted nationally. He emphasized that there is need to promote more participation of women in such campaigns.
IG Training ID Sharma stated that all riders of mountain cycle in this campaign, with the ‘Save Environment-Stay Healthy and Women Empowerment’ movement, while doing mountain cycling, will spread this message to the people settled in the hill areas of the Himalayan region in the remote 350-km area.
On this occasion IG Training BSF ID Sharma, Secretary Tourism Dilip Jawalkar, BSF Officers, Subordinate Officers and Jawans, retired CAPF officials, students from various schools and colleges, Cadets of NCC and Scouts & Guides, Army, BSF ITBP and national level civil mountain cycle riders were present.

Garhwal Post has established itself as a credible, balanced and forward looking newspaper in India. Based in Uttarakhand, the daily is read by the aware, socially and culturally responsible, high-income elite of society.
Contact us: info@garhwalpost.in
pittsburgh over 50 singles https://garhwalpost.in/high-end-matchmaker/