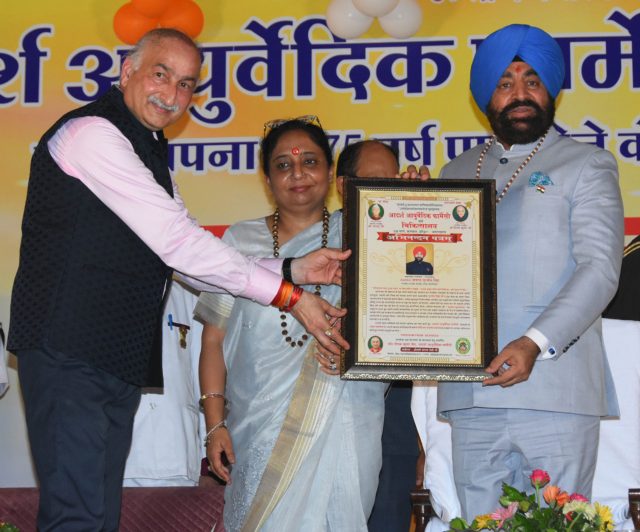 Haridwar, 12 Aug: Governor Lt-General Gurmit Singh (Retd) on Friday participated as the Chief Guest at a programme organised to commemorate the completion of 75 years of “Adarsh ​​Ayurvedic Pharmacy” located at Nirmal Cantonment, here.

On this occasion, the Governor felicitated the families of martyrs and the people who done special work on Ayurveda, Yoga, protection of Gau-Ganga.

While congratulating the Adarsh ​​Ayurvedic Pharmacy family at the event, the Governor said it was a pleasant coincidence that even as the Amrit Mahotsav is being celebrated on the completion of 75 years of independence, the Adarsh ​​Ayurvedic Pharmacy has also completed 75 years of its journey. He said that during the Covid period, also, Yoga and Ayurveda instilled confidence among the people on fighting this disease.

In his address, the Governor said, “Ayurveda and herbs connect us with our roots, civilisation, culture and history. It is the responsibility of all of us to share Ayurveda with the entire humanity and work on making India a world guru.”

He added that Ayurveda and Yoga are an integral part of Sanatan culture. It is because of this that the ancestors lived a long life.

He praised Haridwar and its many important institutions for rendering their services in the spread of Yoga, Ayurveda, Marma Chikitsa and Sanskrit Vidya. In this direction, Adarsh ​​Ayurvedic Pharmacy has also been rendering its important services in the spread of Ayurveda over the last 75 years. He described Haridwar as the Triveni confluence of Yoga, Ayurveda and Sanskrit Vidya, and said these three disciplines are incomplete without each other.

Speaker of the Vidhan Sabha, Ritu Khanduri said that the identity of India is due to its civilisation, culture and Ayurveda.  There are many medical systems in the world, but Ayurveda is different. After Covid, people have increased inclination towards Ayurveda.