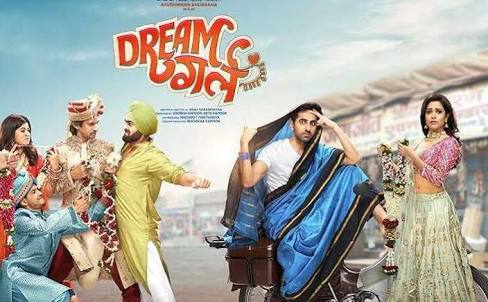 Post his hat trick deliveries- Andhadhun, Badhaai ho and Article 15, Ayushmann Khurrana is set to add another feather in his cap with Dream Girl. His choice of films, assortment of roles, varied characters, audience’s acceptability and dedication has made him a top- notch actor. Perhaps hand-picked solely by his gut feeling, he has cleverly handled unique topics with grace and finesse, such as sperm donation, erectile dysfunction, middle-aged parents expecting a baby, a man with perfect eyesight playing a blind pianist and witnessing a murder without a blink, foreign-bred IPS officer handling crime in the heartland of India, etc. The magic repeats in Dream Girl. His first entry, draped in a sari as Sita infused charge in the audience, a response generally observed for Salman, Hrithik, Aamir, Akshay and Shah Rukh. Written and directed by Raaj Shaandilyaa, Dream Girl’s intention to create a riot of laughter is successful. Comedy is in the veins of Raaj’s writing. He has been associated as screenwriter and content director of Comedy Circus and Kapil Sharma shows. The spontaneity of rib-tickling dialogues, timings, and interesting punches – all speak in the favour of this debut director. A desperate unemployed young man, Karam (Ayushmann Khurrana), is pricked by his father on a daily basis to stop playing the parts of Radha or Sita in the community plays. The audience just loves his voice lent to these female mythological characters. He has this trait in him as an inbuilt faculty from childhood days. He would save his school friends by making fake calls to the teacher posing as their mother. A flyer lands him to a low-profile call centre where his female voiceover is put to best use for friendship/ erotic talks with callers. His popularity as Pooja, name he gives to himself for tele calling, spreads like wild fire in the small town of Gokul, Mathura and near by NCR region. He has a list of regular callers that comprise a cop, who is fond of shayari but has no one to share it with, a self- declared brahmchaari and his servant, an impassioned Haryanvi teenager, a fiery woman who has developed strong prejudice against men after three breakups, an old widower who finds solace in Pooja’s seductively kinky talks. It’s a job that earns him well bathe has to hide his true identity from both his fiancée and father although not from his friend, Smiley (Manjot Singh). Very soon he is in dire straits when the wishes of the callers become intense and conflict with his job’s rule book. Most of them reach a connecting stage where they are ready to cross all personal, social and religious limits to marry Pooja. Raaj’s writing has woven a gripping story keeping it restricted to the lives and adventurous endeavours of few selected callers. He has hilariously interlinked their lives to revolve around Pooja while she remains at the centre stage. All strings are connected and the selected characters keep hitting upon each other during the film’s course making the watch thoroughly enjoyable. Dream Girl has a well-oiled, smooth sprint in the first half. It runs slackly after the interval when it suffers from mild repetition, the comedy weakens and the characters turn more theatrical. Still it gives no reason not to strain one’s jaw muscles with incessant laughter and end it with some lessons on how people are gripped with ‘loneliness’ in the times of hundreds of followers and friends on social media. The heavy weight rests on Khurrana’s shoulders but the supporting cast embellish his role with their soothing presence and stellar performances. Raaj’s experience to deal with comedy on TV shows reflects in the film while handling most scenes. Music doesn’t have much role to play in Dream Girl. Nusrat Barucha casted against Khurrana as female lead is merely there for the sake of smiling and nodding at what Karam does. Vijay Raaz as a Haryanavi cop stands out with his dialogues, delivery and wit. Manjot Singh is in superb form, giving some juicy scenes and is extremely natural as Karam’s partner-in-crime. The two friends render many chuckle some moments. Anu Kapoor, Karam’s father, a small town shopkeeper selling funeral material with his typical idiosyncrasies is flawless. It is only when his character undergoes a makeover twist that he sounds comical. His pairing with Khurrana is anyway unforgettable in Vicky Donor. Both these ace actors ooze out with remarkable moments. Abhishek Banerjee is brilliant as always. His infectious smile, a caricatured look of a sub-rural man does half the job for him. It is laudable to discover the ease with which Ayushmann Khurrana performs in each frame. Presently, he is traversing in an orbit in his career zone where he can confidently experiment with multifarious roles. His grip over the language, dialogues and accent supporting the script is an added advantage. There are moments in Dream Girl, where he could have faltered in the identity-confusion while dealing with people who know him both as Karam and are connected with Pooja; he handles this awkwardness without crossing the line between the two characters where one is real and the other is abstract. Dream Girl also delivers a facetious message in jesting flavour. Generally, a message wrapped in humour hits the heart; however, the short talk in the end on ‘loneliness’ in the lives of many who resort to these adventurous talks with an unknown caller to seek comfort has not been convincingly explored. Yet, it is a fun watch and as I always say – laughter is a rare commodity these days, hence it’s an opportunity not to be left unexplored.