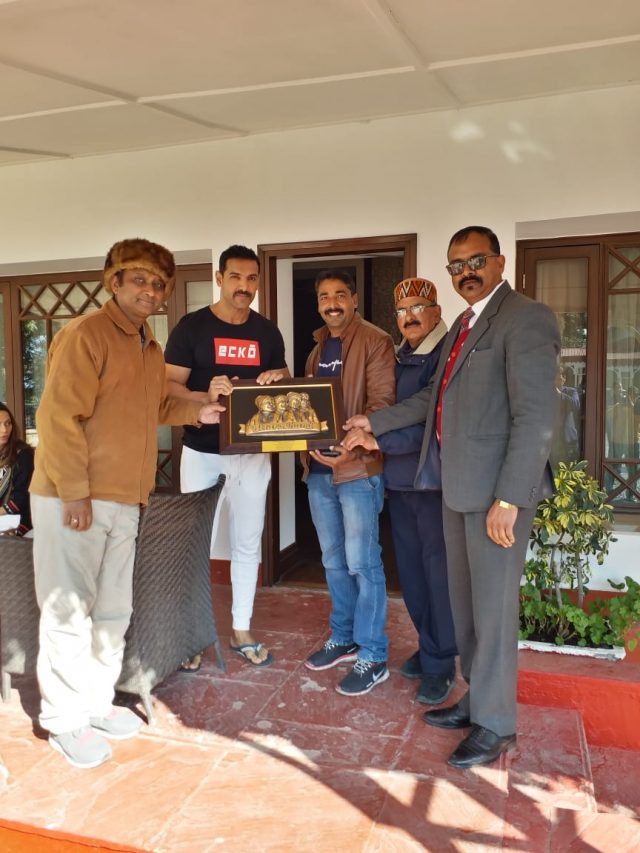 By OUR STAFF REPORTER
MUSSOORIE, 14 Dec: After completing the three-day shooting of the film, Batla House, film star John Abraham left for Mumbai on Friday afternoon.
A memento was presented to John Abraham by Surat Singh Rawat and Mohammad Tahir based on the folk culture of Uttarakhand.
Interacting with media persons, John said Mussoorie was a very good hill station, the climate was very good and people were also friendly. He urged the locals to keep Mussoorie green and clean by preserving the natural beauty. He said he felt uncomfortable with Mussoorie’s traffic and sanitation system and asked the Administration to manage the traffic problem seriously as, due to it, people had to face lots of problems. He also asked the people of Mussoorie not to use plastic bags as they harmed the environment.
He said he had come to Mussoorie for the second time to shoot and this journey was very good. John Abraham had come to Mussoorie on 10 December to shoot some scenes of his upcoming film, Batla House. The shooting ended on Thursday evening.
At around 12.30 p.m., Friday, he left for the Dehradun Airport. Prior to checking out of the hotel, John took photographs with the hotel staff and thanked them.