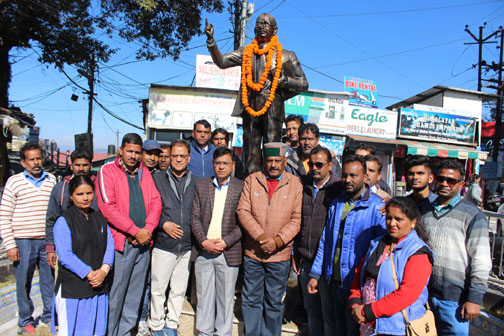 Darshan Rawat and Nandlal Sonker said that the world’s largest constitution had been prepared by Dr Bhimrao Ambedkar. It was created after closely examining all the constitutions of the world. Every citizen had been given equal rights and it was clear that India believed in all faiths. It has no official religion. They said that Baba Saheb worked for the unity of the country and worked to build all the religions, castes in one form, which could never be forgotten.

It was pointed out that India’s Constitution has 448 paragraphs, 12 schedules and 94 amendments. It is a handwritten constitution that contains 48 articles. It took 2 years, 11 months and 17 days to prepare it.

Garhwal Post has established itself as a credible, balanced and forward looking newspaper in India. Based in Uttarakhand, the daily is read by the aware, socially and culturally responsible, high-income elite of society.
Contact us: info@garhwalpost.in
where to find single men date 6 weeks from now six months relationship