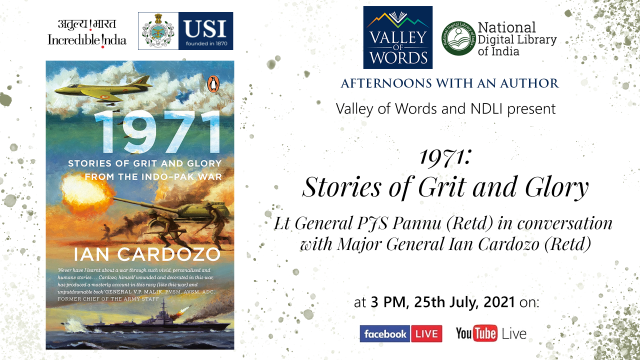 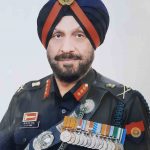 Fifty years ago, India achieved an unparalleled and decisive victory against Pakistan in an all out war that was fought by the Indian Armed Forces on, both, the Eastern and Western fronts of India. This glorious victory was achieved against all odds in a largely adverse international climate. The author, Maj Gen Ian Cardozo, a battle casualty and a war hero who is an acknowledged war historian, has in this book brought out spine chilling accounts and stories of that War that the younger generation must know.

In July 1971, General Yahya Khan, then the President of Pakistan, warned India of a “total war”, hinting at India to stay away from meddling in Pakistan’s affairs in East Pakistan. A few days later, in August, he threatened that Sheikh Mujibur Rehman would be given a death sentence. Rehman, who after winning elections was being denied the leadership of Pakistan, was accused of “political betrayal”. Following a backlash and revolt by the Bengali population, Sheikh had been put into solitary confinement in Lyallpur Jail. Millions of Bengali Muslim refugees that had already begun pouring in from East Pakistan to Indian territory from the beginning of the year, turned into a torrent with Yahya’s announcement. Before the end of 1971, almost 10 million refugees were in India. In those days, before the actual war between India and Pakistan began, vehicles in Pakistan would be seen with stickers reading “Crush India”, while in India the stickers on the street read “Liberate Bangladesh”.

In the wake of India supporting the liberation of Bangladesh by the assistance given to the Bangla refugees entering our county in hordes, Pakistan began to threaten India with dire consequences. The then Prime Minister of India, Indira Gandhi, faced the great challenge of shaping world opinion against Pakistan and also getting support for the creation of Bangladesh. Henry Kissinger made a hurried visit to India to deter, in fact, warn India of consequences if India did attack Pakistan. Kissinger then visited Pakistan and China in Pakistan’s military aircraft on a secret mission requesting Chinese support for Pakistan.

The Pakistan Army used a tactic they had mastered in earlier years of running a proxy war, by recruiting Bihari Muslims of East Pakistan to kill the Bengali Muslims. The Indian Army, on invitation and with the tacit approval of the provincial government of Bangladesh (name given during Liberation Struggle), posted some skilled officers with small teams in a manner so that they could covertly train and equip the Mukti Bahini (the guerilla resistance movement which comprised Bangladeshi military, paramilitary and civilians during this war of liberation) under the code name of Operation Jackpot.

India was certainly in a war-like situation, handling the mass exodus of refugees, a clear case of ethnic cleansing by Pakistan. While the world watched this human tragedy quietly, India had no option but to take recourse to military action. General (later Field Marshal) Sam Manekshaw, then COAS, was asked by Indira Gandhi to wage a war in the earlier part of the year. A fine professional soldier, he had his own mind on picking the right time to attack Pakistan. Of course, he had professional reasons to delay the War. This gave time to India to prepare diplomatically as well as militarily. On 3 December, the attack by Pakistani forces in the western sector gave a legitimate cause for India to attack Pakistan. Emboldened by Chinese and US support, Pakistan was surprised at the speed of the Indian counter offensive in the west. Indian Forces were in a hurry to capture the strategic objective of Dhaka before Pakistan could get external support.

This swift retaliation was not only due to the meticulous preparedness of the Indian Armed Forces but also due to the advance warning India had that Pakistan was planning something big. This has been brought out in the book: “1971, Stories of Grit and Glory from the Indo-Pak War” by Maj Gen Ian Cardozo. Gen Cardozo’s book tells us why India had set up Wireless Intercepting Stations in September 1971. These were the brainchild of Maj Gen Jacob, who believed that “being warned is being forearmed”. These stations could lock into communication between Rawalpindi, Lahore, Dhaka and Karachi. We also learn about less well-known but brilliant and dedicated officers and personnel such as Maj Dharma Dev Dutt or 3D as he was known who cracked the Pakistani Naval Code while transcripting these coded transmissions. It was on 8 November that year, while trying to latch on to messages between Karachi and Dhaka, that he noticed a huge increase in the number of messages going back and forth.

The breaking of the code revealed that Pakistan was moving towards an attack on India leading to a definite war. On the 3rd of December, when Pakistan launched its first attack, the Indian Air Force went in for air attacks on the entire war front, literally paralysing the Pakistani Air Force. The Indian Navy, in a swift attack caused heavy destruction at the Karachi port on 4 December with a repeat on 12 December with many ships, infrastructure and fuel dumps going up in flames each time. The Indian Army’s land operations, though more defensive initially in the west, were soon beating the enemy in every battle.

The 1971 war, which lasted about two weeks, has many stories of grit, glory, valour and gallantry. Many of these have been documented on paper as well as celluloid and some have become folklore. Gen Cardozo’s book, however, tells us of many lesser known, unnamed and not any less heroes that played a vital role in the victory of India and the liberation of Bangladesh.

(Watch me / Gen PJS Pannu in conversation with the author and war hero, himself, at 3 p.m., 25th July, 2021 on Valley of Words Facebook and YouTube Live)

Garhwal Post has established itself as a credible, balanced and forward looking newspaper in India. Based in Uttarakhand, the daily is read by the aware, socially and culturally responsible, high-income elite of society.
Contact us: info@garhwalpost.in
hillsboro singles zoom dating site