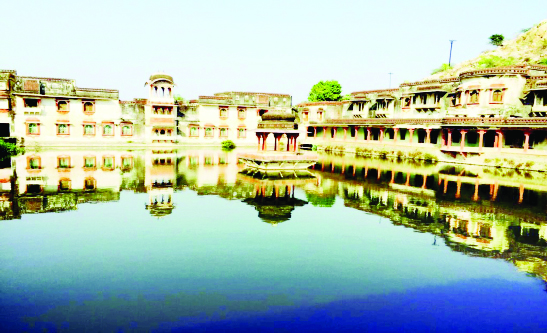 If you look down at the Doon from the western edge of our
hills, you see the expanse of Prem Nagar spread out like a map laid out upon a table. This is where some seventy-odd years ago stood the Central Internment Camp where in sweltering heat, between tea gardens and scrub, arose row upon row of thatched-roof barracks built by Capt. Kirpa Ram & Co., Mhow based entrepreneurs.
‘Given the war-time petrol shortage,’ recalls Mohan Jauhar, ‘Thousands of donkeys were used to carry sand, stone, gravel and flat-reeds from the Asan river. I remember my father did his rounds on horseback.’
‘Luckily we weren’t locked up,’ jokes my friend Anand Jauhar, ‘But Mohan, Govind and I ended up in Doon School.’
In the camps, there were no women or children, only German men, who far outnumbered the Italians, Bulgarians, Hungarians, and Finns internees. While most idled away their time; seven had better ideas – to break free. And they did on 29th April 1944, at 2.30pm with Magenar and Von Have, disguised as British Officers – swinging swagger sticks – pretending to be in charge of the others, who were disguised as a fake native wire repair gang. Grasping courage in their hands, they marched boldly through the main gates, where the guards presented arms.
Once outside, they split into two groups: five headed towards the Himalaya; while Magener and Von Have bluffed their way1500 miles across India, masquerading as British Officers. Caught by the Japanese as spies in Burma, to be later hailed as war heroes in Tokyo.
Nineteen days into their escape, Friedal Sattler and Treipi were hit by altitude sickness, forcing them to return to Prem Nagar. However, Kopps thought seeking asylum in Nepal would be better. And found himself escorted to the British Embassy by the troopers, and then the trap was sprung! Under arrest, he was sent back to the Central Internment Camp just in time for Christmas.
‘We were not arrested’ Harrer maintained as he wrote of their initial foray into Nanga Parbat: ‘But involuntarily taken to Karachi where the superintendent of police received us saying: ‘Well gentlemen, you lost your way while hunting, didn’t you?’
‘Yes sir!’ was the ready response of the team.
The other escapee, Friedal Settler, who had first been captured in Bali, in the Dutch East Indies, was relocated to Deoli, southwest of Agra, where he secured permission to design the interior of Maharaja Bahadur Singh of Bundi’s, new summer palace – Phool Sagar. Whilst this did earn him some privileges, obviously it could not fix all his troubles as one stormy night they sneaked out hoping to visit some Korean Red Cross nurses. Clueless as to who the eager beavers were, a riot broke out, ending with solitary confinement -the mandatory twenty-eight days.
Meanwhile across the Roof of the World, persevered the two Austrians, and reached Kyrong on 17th July 1945 to arrive in Lhasa on 20th January 1946. Thenceforth the narrative is as set out by Harrer’s in his book Seven Years in Tibet where he skillfully mixes fact with fiction.
Looking for bare facts, I arrive at Oakless, home to the Himalayan encyclopedia, the author Bill Aitken, who tells me that there is no doubt that as a mountaineer Harrer was brave but ‘In moral terms he was a wimp. His downfall came after the withholding of the release of the film by the Jewish underwriters of the project.’ It had come to a head when two German journalists of Stern magazine found Harrer’s SS dossier with the original documents signed in his own handwriting which forced him to change tack and admit his signatures.
‘How could two foreigners get past the scrutiny of several check posts?’ Bill mulls, adding: ‘That too when no outsider could come within a hundred miles of Lhasa? Yet they managed to arrive to squat in a nobleman’s garden?’
Peter Aufschnaiter lived in Nepal into his old age, returning to Europe it was safer, but only after debriefing in Chakrata by Manohar Malgoankar. Asked about Heinrich Harrer, his childhood tutor’s past, the Dalai Lama compassionately left it at: ‘That’s between him and his conscience.’