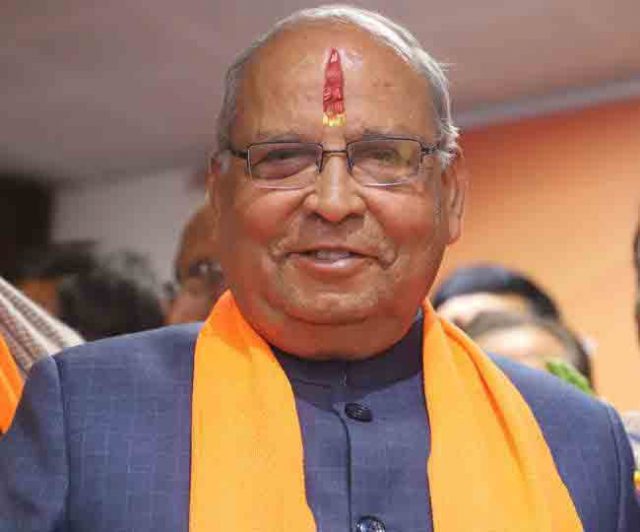 By Our Staff Reporter
Dehradun, 24 Feb: BJP State President Bansidhar Bhagat today claimed that the Modi Government was helping generously to speed up development in Uttarakhand. He said that the positive effects of the development would soon be very evident here. He was commenting on the “successful” tour of Delhi by Chief Minister Trivendra Singh Rawat.
Bhagat said that, during the Delhi visit of Chief Minister Trivendra Singh Rawat, all senior leaders including the Prime Minister patiently heard the important issues brought to their attention by the CM for the development of the state and assured full cooperation. He further claimed that the Modi Government was very sincere and serious regarding the development in Uttarakhand.
Bhagat claimed that the approval for the final location survey of the Tanakpur-Bageshwar railway line would boost rail connectivity in the state. He reminded that Railway Minister Piyush Goyal had directed the railway officials to take necessary action on urgent basis on doubling the existing single rail line in Haridwar-Raiwala section and he had also agreed to construction of the first diversion line from Raiwala station to provide direct rail service between Dehradun and Rishikesh. He added that Goyal had directed the Railway officers to prepare a plan to make commercial use of the old Rishikesh Railway Station at the recommendation of Chief Minister Rawat.
At the request of the CM, the Union Railway Minister had also agreed to get a study conducted by the Railway Ministry on constructing ropeways and railway in the hills on the lines of services operated in Switzerland.
Bhagat said that, with the efforts of the Chief Minister, the approval of Rs 48 crores for construction of roads inside ISBT complex had also been granted by Union Road Transport and Highways Minister Nitin Gadkari. In addition, an amount of Rs 225 crores was also approved for construction of the Rudraprayag tunnel and another amount of Rs 69 crores for reconstruction and repairs of old roads bypassed in the new national highway in Uttarakhand. The Union Minister had also agreed to approve a plan to ease congestion in Jogiwala in Dehradun which is a major bottleneck for the traffic running between Dehradun and Rishikesh and Haridwar. In addition, at the request of the CM, Gadkari had also given in-principle approval to declaring 6 highways (total length 524 km) in Uttarakhand as National Highways. These included LakshmanJhula-Dugadda-Nainidanda-Mohan-Ranikhet (274 km), Panduakhal-Nagachulakhal-Uphraikhal-Baijro (64 km), Khairna-Ranikhet (34 km), Buakhal-Devprayag (49 km) and including Devprayag-Gaja-Khari (70 km) and Biharigarh-Roshanabad (33 km). Chief Minister also requested the Union Minister to notify these routes as National Highways at the earliest.
Bhagat also reminded that at the request of the Chief Minister, Union Jal Shakti Minister Gajendra Shekhawat had assured that the cabinet clearance on Lakhwar project and agreement on Kisau Hydropower projects would be granted soon. Similarly, Union IT Minister Ravi Shankar Prasad had also agreed to strengthen the digital connectivity of Chardham region. With this, the Bharat Net 2.0 project in Uttarakhand had been given a green signal from the Government of India. Under this, 12 thousand villages of Uttarakhand would be connected to the Internet. This would also boost internet connectivity in the border areas, also.