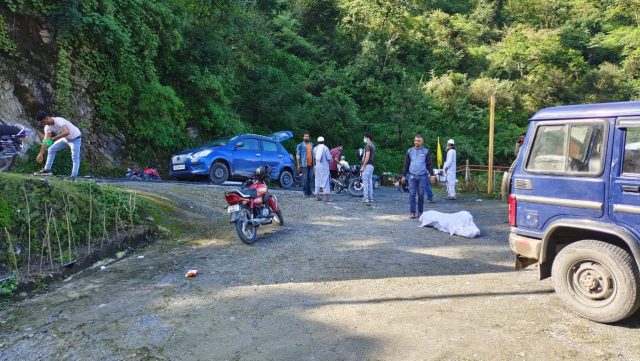 By Our Staff Reporter
Mussoorie, 5 Sep: The dead body of a youth was found near Chunakhala on the Mussoorie Dehradun Road, here, today. On receiving information, the police reached the spot under the leadership of Mussoorie Police Incharge Rajeev Rauthan and took possession of the body. It was taken to the sub-district hospital for post-mortem.
The deceased was a resident of Bijnor who had left for Mussoorie from Bijnor on 3 September but did not reach Mussoorie. The family members of the youth had informed Bijnor and Mussoorie police about not being able to contact the youth. The police began the search for the young man.
On Sunday, his bike was seen near Chunakhala. After a search, his body was found lying in a ditch. The local public informed the police. Police In-charge Rajiv Rauthan said that the deceased was identified as Sanid Baig (35), s/o Tauqir Baig, resident of village Khusyaki, in Bijnor. The family members of the youth were been informed about the incident. The deceased was taken to the hospital where the doctors declared him dead. The incident is being investigated and more would be known after the autopsy. How the young man fell into the ditch is also being investigated.
A team has also been sent for questioning the people of the area, while the nearby CCTV cameras are also being checked.