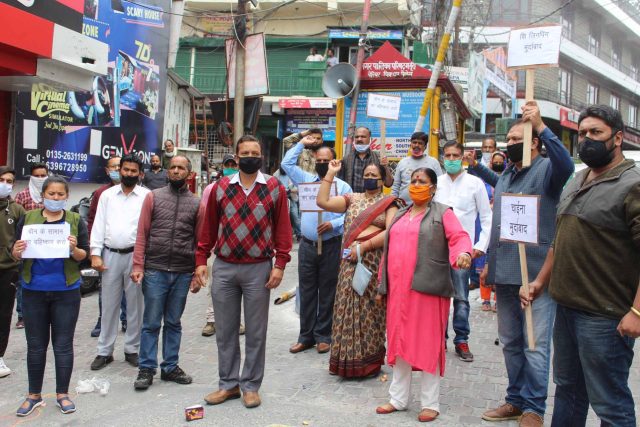 MUSSOORIE, 18 Jun: Bharatiya Janata Party activists paid tribute here, today, to the 20 soldiers who were martyred in Ladakh. They gathered at the Picture Palace Chowk and raised slogans against China. On the occasion, they also destroyed Chinese goods.
Mussoorie BJP President Mohan Petwal and General Secretary Kushal Rana said that the time had come to respond to China. The Indian Government would take a decision soon in this regard.
They appealed to the people to boycott Chinese made goods completely.
On this occasion, people demanded that the central government should stop the import of Chinese goods with immediate effect. The TikTok app was used the most in India and ought to be deleted by all at once. They said that all Indians should unite and oppose China. They said that people should give a befitting reply to China by adopting the policy of ‘Pick Indian, Kick Chinese’.
Present on this occasion were Mussoorie Cantonment Council Vice President Badal Prakash, Mahila Morcha President Meera Suriyal, Gambhir Panwar, Narendra Anand, Ramesh Khanduri, Vijay, Narendra Padiyar, Sapna Sharma, Abhilash Rana, Anil Singh, Kunal, Anita Saxena and many others.