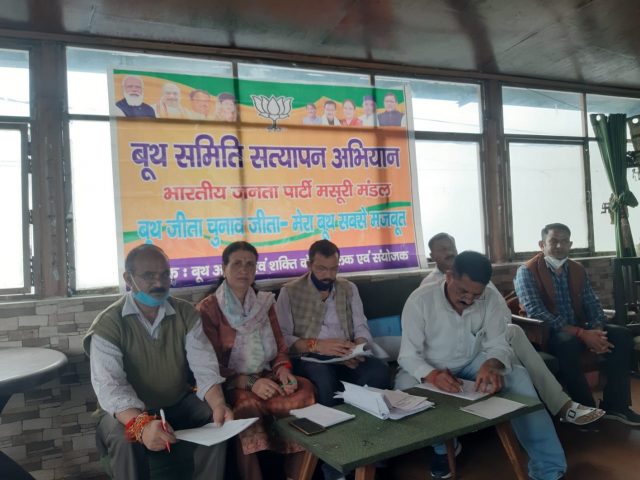 By Our Staff Reporter
Mussoorie, 25 Aug: Work is being done by the BJP to connect with the voters here at the booth level. A BJP booth committee verification campaign was started on Wednesday under the leadership of Mussoorie BJP President Mohan Petwal, in which booth level presidents and senior officials participated.
At the meeting, the key speaker in-charge of OBC Morcha, State Minister Rampal Rathore, and Mussoorie President Mohan Petwal gave detailed information about the importance of the booth and the participation of every worker. Petwal urged the workers to work at the booth level for the upcoming assembly elections. He said that the Bharatiya Janata Party is called the Party with a Difference, because it works first for the country, then the organisation and finally the individual. With this objective, the Bharatiya Janata Party is moving forward in the entire country. He said that every BJP worker is busy preparing for the 2022 elections, this time the target is of 60 plus in Uttarakhand and it will be achieved with the cooperation of the people.
Present on this occasion were Shakti Kendra Coordinator Narendra Padiyar, Kushal Rana, Arvind Semwal, Chandrakala, Kamala Thapliyal, Rakesh Thakur, Kamal Sharma, Pushpa Padiyar, Vijay Butola, Badal Prakash, Manoj Kharola, Mukesh Dhanai, Manoj Rengwal, and others.