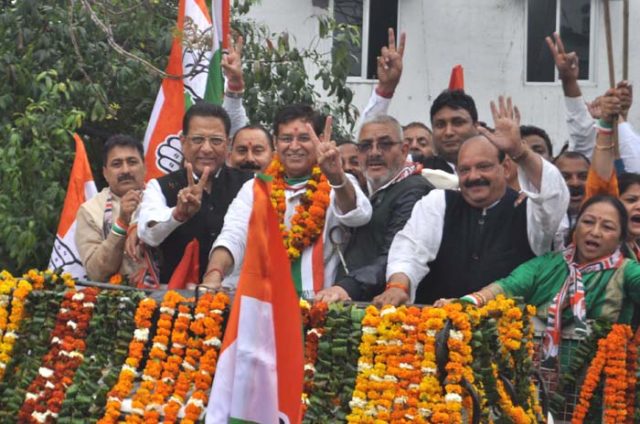 By OUR STAFF REPORTER
Dehradun, 25 Mar: On the last day for filing of nominations, today, the BJP candidate for the Nainital-Udham Singh Nagar seat, Ajay Bhatt reached the Rudrapur Collectorate and submitted his papers. He was accompanied by Cabinet Minister Yashpal Arya, former Chief Minister Bhagat Singh Koshiyari and other party leaders.
The Congress candidate for the same seat, Harish Rawat also filed his nomination at the Rudrapur Collectorate.
At the Almora Collectorate, BJP candidate Ajay Tamta and Congress nominee Pradeep Tamta filed papers for the Almora seat. UPP candidate Vimal Arya also submitted his nomination papers.
BJP candidate Ramesh Pokhriyal ‘Nishank’ filed his papers at the Haridwar Collectorate. He was accompanied by Chief Minister TS Rawat, Cabinet Ministers Madan Kaushik, Prakash Pant, MLA Kunwar Pranav Singh ‘Champion’ and other party leaders.
Congress candidate for the Tehri seat, Pritam Singh submitted his nomination papers at the Dehradun Collectorate. Before that he addressed supporters at the Party Headquarters. The Congress nominee for the Pauri seat, Manish Khanduri also filed his papers at the Collectorate.
The filing of nominations began on 18 March. Today was the last day for filing nominations. As a result, there was a rush of candidates at the various centres to file nominations. The last hour of nominations was video recorded at the instructions of the Election Commission.
IANS adds: The process of filing nominations for all the five Lok Sabha seats in Uttarakhand going to the polls in the first phase on April 11 ended on Monday amid steady rainfall.
The scrutiny of the nominations will be done on March 26 while the last date for withdrawing nominations is March 28, top officials in the state electoral office said.
Meanwhile, morning showers failed to dampen the spirit of the candidates who were busy campaigning full steam in the state.
However, the helicopters of some top leaders of the Bharatiya Janata Party (BJP) and the Congress could not take off due to bad weather. As a result, Chief Minister Trivendra Singh Rawat and a few top Congress leaders could not crisscross the length and breadth of the state.
In rain-drenched Dehradun, most of the candidates including state Congress President Pritam Singh, filed their nominations for the Tehri seat. “The rain failed to dampen our spirits. The Congress will win all the five seats in Uttarakhand,” said Singh, who will face Mala Rajya Laxmi Shah of the BJP, who filed her nomination on Friday.
Harish Rawat organised a rally in Rudrapur, where he accused the Central government of failing to improve the conditions of the farmers.
The Uttarakhand Kranti Dal (UKD) also fielded five candidates for the Lok Sabha polls.
Similarly, the Bahujan Samaj Party-Samajwadi Party combine too fielded five candidates. While the BSP will contest four seats, the SP will fight from Pauri.