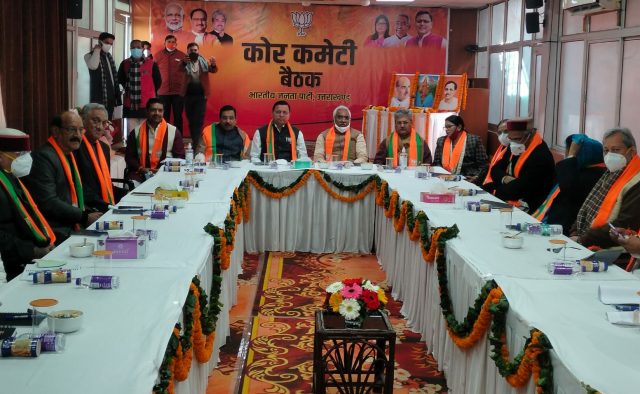 DEHRADUN, 15 Jan: Uttarakhand BJP’s Core Committee has finalised its panel of names, for all the 70 seats in the state for the assembly polls, and forwarded the panel of names to the BJP Parliamentary Board in New Delhi. Sources in the BJP stated that BJP Core Committee has finalised 1 to 3 names for each seat. Sources further claimed that the BJP Parliamentary Board may hold its meeting tomorrow again to mull over candidates for the Uttarakhand, Goa and Punjab assembly polls. Sources further confirmed that BJP State President Madan Kaushik, Chief Minister Pushkar Singh Dhami State BJP General Secretary (Organisation) Ajaey Kumar, Election in-charge Prahlad Joshi, State in-charge Dushyant Gautam have been summoned tomorrow by the BJP’s Central leadership where they are expected to participate in a meeting to discuss the names on the panel with the Central leadership, before the BJP Parliamentary Board takes a final decision in respect of the candidates. Sources claim that on 25 to 28 seats, only one name and on 15 to 20 seats, only 2 names have been forwarded by the BJP Core Committee to the Parliamentary Board. On the rest 3 names each have been forwarded. In today’s meeting, Cabinet Minister and member of BJP Core Committee Harak Singh Rawat was conspicuous by his absence and his absence became a major source of speculation in the political circles today. However, Rawat later sought to put the speculation to rest by claiming that he could not receive the information about the meeting in time and therefore missed the meeting. In the meeting, Uttarakhand’s election in-charge Prahlad Joshi, Chief Minister Pushkar Singh Dhami, State President Madan Kaushik, former Chief Minister Vijay Bahuguna, Ramesh Pokhriyal Nishank, Trivendra Singh Rawat, Tirath Singh Rawat, besides state ministers Subodh Uniyal, Dhan Singh Rawat were also present. Kaushik said that the observers had already submitted their reports and names on each constituency and these names were discussed in the Core Group Meeting. Highly placed sources claimed that the Core Group meeting shortlisted the names of around 8 to 10 names on each constituency submitted by the observers to just 1 to 3 names on each constituency. Sources further claimed that some sitting MLAs were likely to be declined ticket this time based on their poor performance as MLAs and the feedback received from their respective constituencies. Sources claimed that winnability would be the sole criteria for grant of tickets by the Parliamentary Board though some names despite poor feedback could still manage tickets. It may be recalled that the BJP Parliamentary Board in New Delhi today declared candidates for the first and the second phases of assembly polls in Uttar Pradesh and perhaps for the first time, a significant number of sitting MLAs did not find their names in the list. This apprehension is reportedly present among many sitting MLAs in Uttarakhand and they have started lobbying for the ticket. Several MLAs including some several time MLAs today called on Chief Minister Pushkar Singh Dhami, BJP State President Madan Kaushik and even on former Chief Minister Trivendra Singh Rawat to lobby for ticket. Some sitting MLAs were learnt to have also called on Dushyant Singh, the leader in charge of the party affairs in Uttarakhand and on Pralhad Joshi, the leader in charge of election affairs in the state as they are both in Dehradun at present. Pauri, Tehri and Pratap Nagar MLAs were among those who called on several party leaders early this morning and even yesterday. Meanwhile, deeply anguished over return of Sanjiv Arya to Congress and the possibility of Congress ticket to him from Nainital (SC Reserved) constituency, former MLA and Congress leader Sarita Arya had yesterday called on some BJP leaders in Dehradun. She has already indicated that her options are open and she may quit the party in case of denial of ticket from Nainital. It may be recalled that she had been the Congress candidate from Nainital as sitting MLA in 2017 assembly polls from Nainital against Sanjiv Arya who along with his father and senior Congress leader Yashpal Arya had then switched over to BJP. Sarita Arya had lost to Sanjiv Arya in 2017 but now that Sanjiv Arya and his father Yashpal Arya are back in Congress, she is facing an uncertain future in Congress. Speculation is rife that she may join the BJP soon.

Garhwal Post has established itself as a credible, balanced and forward looking newspaper in India. Based in Uttarakhand, the daily is read by the aware, socially and culturally responsible, high-income elite of society.
Contact us: info@garhwalpost.in
best blind date app https://garhwalpost.in/meet-sexy-women/ free website to find friends