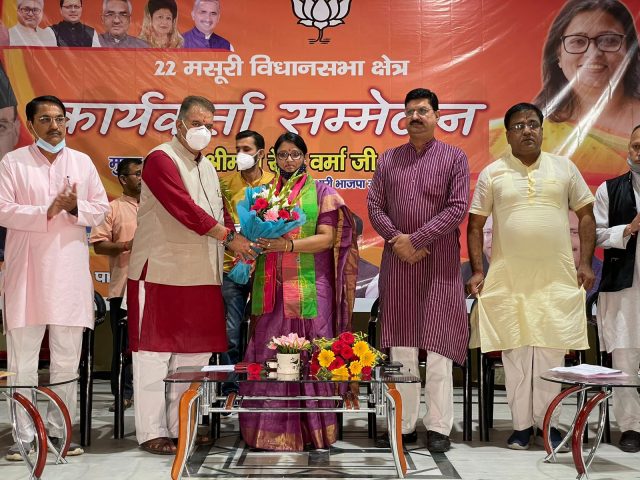 By Our Staff Reporter
Mussoorie, 12 Sep: Giving edge to the preparations for the upcoming assembly elections, a convention of workers of Mussoorie assembly constituency was organised here, today, under the leadership of Rekha Verma, Uttarakhand state co-in-charge of the Bharatiya Janata Party. All the officials of the assembly constituency, senior workers and local MLA, Cabinet Minister Ganesh Joshi participated. Giving the mantra of assured victory to the workers, Chief Guest Verma BJP said that, since 2014, under the leadership of Prime Minister Narendra Modi, the Government of India was continuously taking popular and historic decisions in the public interest. The construction of the Ram Temple, or the abrogation of Article 370 in Jammu and Kashmir, as well as the issue of triple talaq were examples of such bold decisions. These decisions could have been taken only by the Bharatiya Janata Party. The whole nation was with Narendra Modi with the spirit of one nation. National self-respect was being established.
Addressing the workers, Cabinet Minister Joshi said, “I feel I have the privilege of leading the world’s most diverse and beautiful assembly constituency. My party workers are my source of inspiration and energy.
BJP State General Secretary Kuldeep Kumar said that they had to understand their roles for the upcoming assembly elections. Programmes like this would be organised continuously in the constituency till 30 September. There would be addresses by senior workers, followed by training and conferences of the various fronts. The programme outlined by Sitaram Bhatt. Shamsher Pundir apprised the workers of the work done during the Corona period by Minister Ganesh Joshi, especially in the Mussoorie assembly constituency. He added that the development plans of the government needed to be taken to the public. National Vice President of Bharatiya Janata Yuva Morcha Neha Joshi also addressed the gathering. She assured Rekha Verma that the workers of Mussoorie Vidhan Sabha would become a source of inspiration for the entire state. An oath was also administered to all the workers by the assembly in-charge Ravindra Kataria.
Present on the occasion were Mussoorie assembly in-charge Ravindra Kataria, District Panchayat Vice President Deepak Pundir, Sridev Suman Mandal President Poonam Nautiyal, RS Parihar, General Secretary Sundar Rana, President of Shaheed Durgamal Mandal, Rajiv Gurung, Councilor Bhupendra, Sundar Kothal, Kamal Thapa, Chunilal, Satyendra Nath, Yogesh Ghaghat, Mansoor Khan, Manjit Rawat, Jyoti Kotia, Pushpa Padhiyar, Niranjan Doval, Sapna, Arvind Doval, Anurag, etc.

Garhwal Post has established itself as a credible, balanced and forward looking newspaper in India. Based in Uttarakhand, the daily is read by the aware, socially and culturally responsible, high-income elite of society.
Contact us: info@garhwalpost.in
websites to meet new friends online dating in pinehurst nc