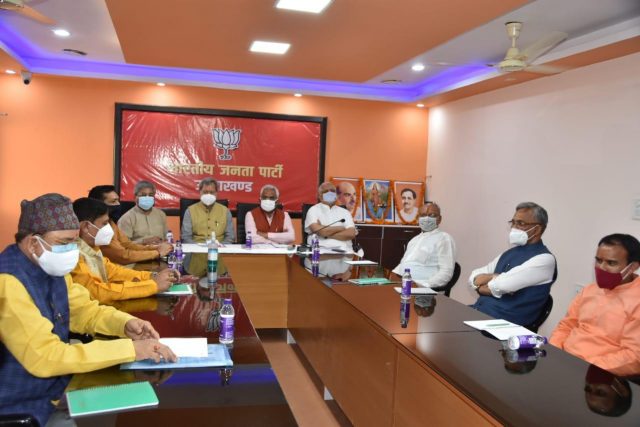 By Arun Pratap Singh
Dehradun, 27 May: BJP’s National General Secretary (Organisation) BL Santhosh, today, chaired a meeting of the core group of the state unit as well as with the heads of various ancillary units to review the preparations of the party organisation for the coming assembly elections early next year. This was Santhosh’s first official tour and assumes particular importance in view of the coming state assembly elections and also because the BJP has recently changed its Chief Minister in Uttarakhand. The party has thought it prudent to take stock of the situation within the party, post the change! BJP is known to start its preparations for the elections rather early and begin working at the booth level in order to galvanise activists to be ready for elections.
The meeting, held today at the BJP State Headquarters, was also attended amongst others by State In charge of the party affairs in Uttarakhand Dushyant Kumar Gautam, BJP State President Madan Kaushik and Chief Minister Tirath Singh Rawat.
Party sources said that the party’s top central leadership is fully aware of the high stakes that the party has in Uttarakhand and Uttar Pradesh among the three states that are expected to go to polls in March next year. Punjab remains the only state where the party does not have much at stake but it is now looking to create a stronger base of its own post its alliance breakup with the Shiromani Akali Dal. However, the focus remains on UP and Uttarakhand despite the fact that Uttarakhand is a relatively smaller state with just 5 Lok Sabha constituencies and 70 Assembly constituencies.
Sources claimed that, in UP and Uttarakhand, some major changes are expected in the party organisation. In UP, Deputy Chief Minister Keshav Maurya is likely to take over as UP BJP President in place of Swatantra Dev Singh, who in the party’s view has failed to galvanise the party effectively. In Uttarakhand, some changes have already been made with Cabinet Minister Madan Kaushik brought in as State Party Chief in place of Bansidhar Bhagat, who failed to impress the party leadership and was made a cabinet minister, instead. Some more changes are coming soon, sources claim. It is stated that due to his inaccessibility, the then CM Trivendra Singh Rawat had created a feeling of despondency and resentment in the party cadres and therefore the changes had taken place.
The party is hopeful of performing reasonably well in the coming elections if the new government led by Tirath Singh is able to perform well and at the same time keep the party cadres happy. However, the party has decided against making large scale ‘lal batti’ appointments, despite pressure from the cadre in order to avoid public resentment.
Today’s meeting was held with the heads of at least 7 ancillary units of the party besides the core group and feedback was taken from them on the Corona problems and the party’s image in the public. The BJP leaders of the state were told to make the party workers as well as elected representatives more proactive in the hills and to help people there through special campaigns for mitigation of the Corona pandemic.