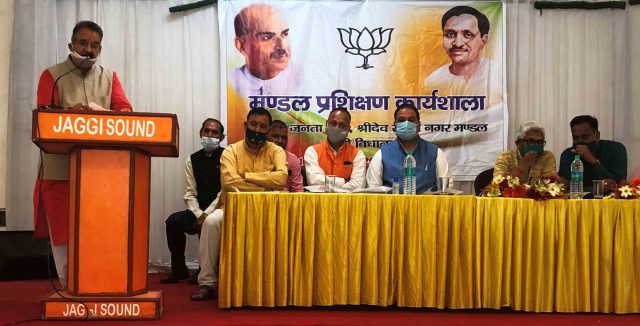 By Our Staff Reporter
Dehradun 11 October: An action plan meeting of a training programme to be organised by the Bharatiya Janata Party Sridev Suman Nagar Mandal of the Mussoorie Assembly constituency was held at a hotel on Rajpur Road, here, today. The main objective of the meeting was to finalise the format of the training programme to be held from 28 October.
Addressing the meeting, MLA Ganesh Joshi said that the Bharatiya Janata Party is the world’s largest political party and every BJP worker is properly trained. He said that training meant that, in addition to strengthening the ideals of the party workers, they should also pay attention to personality development. He said that social media had special importance in the present, so all should know its use. He lashed out at the Aam Aadmi Party and said that it had appeared in Uttarakhand with the elections approaching while, during the lockdown, it was nowhere to be seen. He also accused all opposition parties, including the Congress, of not supporting the people during the Corona times.
Ravindra Kataria, the training head, said that two-day training classes are being organised across the state from 28 October to 10 November.
Present on this occasion were BJP Mandal President Poonam Nautiyal, City General Secretary Ratan Singh Chauhan, Surendra Rana, Rakesh Joshi, RS Parihar, Niranjan Doval, Anant Sagar, Palak Omvir Singh Raghav, BJP leader Abhimanyu Kumar, party officials and councilors.

Garhwal Post has established itself as a credible, balanced and forward looking newspaper in India. Based in Uttarakhand, the daily is read by the aware, socially and culturally responsible, high-income elite of society.
Contact us: info@garhwalpost.in
meet young singles dating app to meet asians perth casual dating