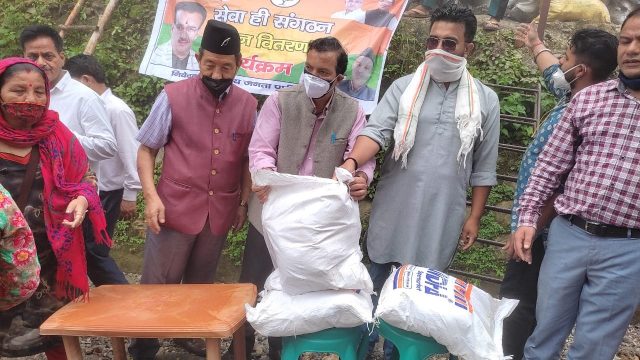 By OUR STAFF REPORTER
Mussoorie, 25 Jul: The Mussoorie BJP is continuing to distribute ration to the poor and needy under its ‘Sewa hi Sangathan hai’ programme. As part of this, ration was distributed to about 350 people at the Petrol Pump, Hussainganj and Mullingar, on the fifth day. BJP workers went from door to door to distribute the ration.
Chief Guest Col TD Bhutia (Retd), Rajiv Gurung and Vishnu Gupta attended the programme. Mussoorie BJP President Mohan Petwal welcomed the guests. Col Bhutia said that the Bharatiya Janata Party is continuously helping the poor, while working to promote the government’s welfare schemes. He said that many people lost their lives during the Corona period, there were no elders left in many families, all of whom were receiving aid under various schemes. Compensation was being given to bereaved family members.
Mohan Petwal said that, over the last five days, the Mussoorie BJP Unit has been distributing ration to the poor. It is to be distributed to about 2000 people in the entire Mussoorie constituency.
Those present included Arvind Semwal, Mukesh Dhanai, Rakesh Thakur, Manoj Rengwal, Manoj Kharola, Sapna Sharma, Abhilash, Anil, Kunal, Anita Dhanai, Anita Pundir, Pushpa Padiyar, Rajeshwari Rawat and Virendra Rana.