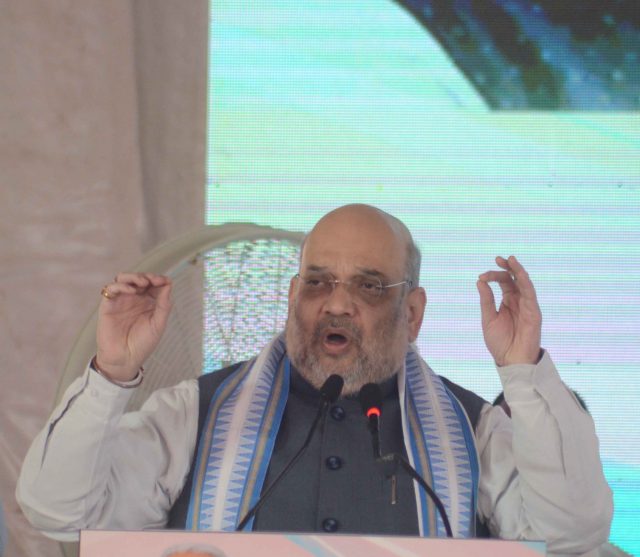 DEHRADUN, 30 Oct: Union Home Minister Amit Shah, who was here to launch some schemes related to the Cooperative Department, left no opportunity to launch an all out direct attack on the Congress and while addressing the public rally at Bannu School Grounds in Race Course here, sought another term of five years for the BJP from the public. The rally was official as well as political. At the official level, Shah launched Ghasiyari Scheme and launched the digitalisation of PACS societies, distributed cheques to beneficiaries of various schemes, and his speech did mention the benefit of these schemes, but the latter part of his speech was understandably political as it was a public rally. Launching a scathing attack on the Congress, Amit Shah said that there were some basic differences between the Congress and the BJP. BJP believed in hard work and fulfilling its promises made to the people and he claimed that more than 85 percent of the promises made in its manifesto by the BJP have been fulfilled. On the other hand, the previous Congress Government was known for its scams and corruption. 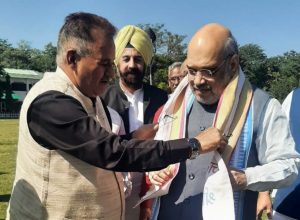 Shah directly threw a challenge to veteran Congress leader Harish Rawat and said that during his chief ministership, the state was famous for forcibly selling low quality liquor through a scam. Shah also claimed that Modi had special attachment with Uttarakhand and added that he would be coming to Kedarnath on 5 November to inaugurate the sculpture of Adi Shankaracharya. Shah said that while BJP believed in hard work which was visible in times of Corona and even the calamities in Uttarakhand, the Congress focussed on scams and appeasement. It was hardly bothered about the welfare of the people. He reminded the gathering that during the Congress rule in Uttarakhand, his convoy had been stopped on a National Highway in Uttarakhand on a Friday, because the Namaz was being offered on the National Highway! Shah said that during any crisis, BJP workers worked doubly hard to be with the people and to help them but Congress was not seen on the ground at all. He asked where was the Congress party during the recent crisis due to excessive rains in Uttarakhand. He claimed that Congress leaders were visible in the public during the elections only. Shah reiterated that the BJP Government at the Centre as well as in the State were working with a clear intention and goal. Shah went on naming one after the other the projects approved and undertaken in Uttarakhand with Central funds during the past 5 years and added that the Centre had approved and granted projects worth Rs 85 thousand crores in Uttarakhand, and all these projects were in advance stage of completion. He challenged Harish Rawat and other Congress leaders to show how many projects had been approved and undertaken in Uttarakhand during the ten year tenure of the then Prime Minister Manmohan Singh. He further challenged the Congress leaders for an open debate in any public place in this respect. He also challenged them to show how many of the promises made by the Congress in its manifesto for the 2012 elections in Uttarakhand had been fulfilled by the then Congress Government. Shah said that Uttarakhand was created by the government led by then PM Atal Bihari Vajpayee and Prime Minister Narendra Modi was keenly leading its development. He claimed that BJP considered it its moral responsibility to ensure proper and adequate development of Uttarakhand, as the state had been created by Atal Bihari Vajpayee. Shah also praised the Chief Minister Pushkar Singh Dhami and emphasised that Dhami was working very hard. During the recent calamity caused by the excessive rains, Dhami led his government in an exemplary manner and he (Shah) was pleasantly surprised to see the alertness and proactive role that the Dhami Government had played towards executing rescue and relief operations. He stressed that due to proactive alertness and alacrity of Dhami Government, not a single pilgrim or tourist lost his life during the recent calamity. He added that Uttarakhand had witnessed unprecedented development in past 4 years but another term was needed to fill all the gaps that had been left by the previous regimes. He expressed confidence that BJP would again form the government in Uttarakhand. Shah also made it clear in no uncertain manner that Dhami was the Chief Minister’s face of the party in upcoming elections by seeking a fresh mandate of five years for Dhami. He said that Bharatiya Janata Party under the leadership of Chief Minister Pushkar Singh Dhami was committed to the development of the state. Farmers were getting the benefits of the schemes. Work was progressing rapidly on many projects at the same time. Attacking the government, he alleged that Congress believed in enjoying the fruits of power not in working for welfare of the people. On the other hand, BJP believed in focussing on development and welfare of the people. He said that due to various Central schemes launched under the leadership of Prime Minister Narendra Modi, every house of Uttarakhand even in remote villages had now electricity and toilets. The women drudgery had been reduced through Ujjawala LPG Scheme since the families in the hills also had LPG gas connections now. He claimed that every house even in the remotest corner of Uttarakhand would have a water connection with water supply reaching every home by December, 2022. The people would soon be able to travel to the hills 365 days a year because of All Weather Roads. He also mentioned the RishikeshKarnaprayag Railway project and several other projects undertaken with the Central funds and reiterated that the Central projects worth Rs 85,000 crores had been undertaken by the Centre in a small state like Uttarakhand, which was unprecedented. Shah appealed to the people to not take a wrong decision in choosing a wrong party to govern Uttarakhand. They ought to trust Prime Minister Narendra Modi and the young Chief Minister Pushkar Singh Dhami and give another chance to him to serve Uttarakhand, Shah appealed. Otherwise Congress would again bring corruption and scams in the state. Shah had arrived rather late in Uttarakhand and in view of paucity of time in hand, the meeting of Shah with the state BJP office bearers at IRDT Auditorium and the Core Group Meeting at BJP State Headquarters were cancelled as he had to go to Haridwar. In Haridwar, Shah first went to Dev Sansriti University at Shanti Kunj and then went to Harihar Ashram in Kankhal Haridwar, to meet the sages including Swami Avdheshanand Giri of Harihar Ashram.