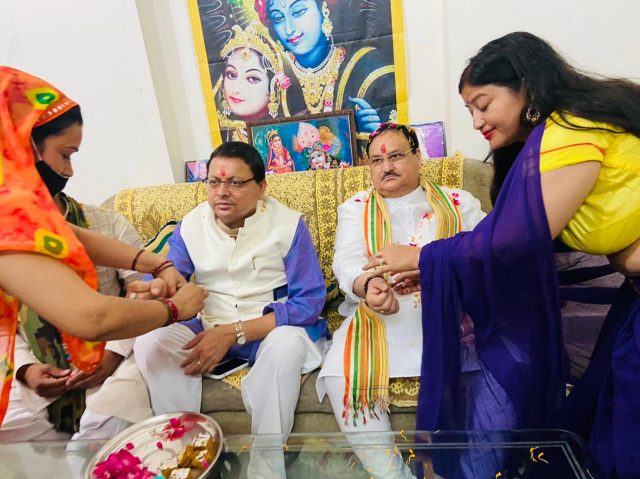 By Arun Pratap Singh
Dehradun, 21 Aug: That the BJP Central leadership is taking Uttarakhand Assembly elections very seriously was indicated by the fact that on the second day of top level confabulation in Raiwala and Bhopatwala, BJP National President JP Nadda indicated that he himself would be visiting Uttarakhand every month to keep a close and constant watch on the party’s preparations for the upcoming assembly polls, as well as to keep a tab on the government’s performance too in the remaining months of the term. Besides this, Nadda also made it clear to the party MLAs that the tickets would be decided on the basis of the performance of the sitting MLAs during their term.
Nadda said that those whose performance would be found satisfactory could rest assured of the ticket while tickets could be denied to those whose performance had not been satisfactory, he asserted. Winnability of the candidates would be chief criteria in distribution of tickets, he stated.
Sources in the party further claimed that Nadda had received feedback that certain MPs, MLAs and Party Office bearers were not visiting their constituencies and assigned districts on a regular basis, and in case of visits were not staying there overnight. Hence taking a serious note of this, Nadda not only spoke to the MLAs and the office bearers of the party but directly asked them how many days in past one month, they had stayed overnight in their constituencies or assigned districts.
The party leadership is also collecting feedback through regular surveys. Nadda also said that the government ought to do all the work that was possible to do in coming 90 days on ground and the MPs, MLAs and the ministers and the office bearers would have to cooperate with the government towards this in a team spirit. He also wanted to know details of party workers who were not happy for certain reasons with the government or the party so that they could be appeased. Sources claimed that during the chief ministership of Trivendra Singh Rawat, certain party workers were feeling neglected and Nadda made it clear to the party leadership that workers be made happy with regular interaction with them.
The party realises that not only the hills, but the party had to maintain its support base in the plains too and for this, Nadda made it clear that Haridwar and in particular the saints in Haridwar had the key to party’s win in the state. The party has a strong support base among the servicemen and ex-servicemen. Keeping this in view, Nadda today participated in the ex-servicemen’s conference in Raiwala on the second day of his tour. During this, he said that the country was safe under the leadership of PM Modi. Prime Minister Narendra Modi has laid a network of roads in Uttarakhand. Good work was being done on the road in Uttarakhand. Development work  was underway at a rapid pace in the state. The soldiers had been honoured by making a war memorial here.
Nadda said that it was his good fortune that he got a chance to attend the ex-servicemen conference today. BJP always felt that it was everyone’s duty to give due respect to the soldiers. No amount of respect could be enough for the soldiers he said. On this occasion, Dhami claimed that he understood the pain of the families of the soldiers. He also reminded that he himself was from a military family. When a soldier was martyred on the border,  people did not normally realise what sufferings his family had to undergo. Only the affected family could know this.